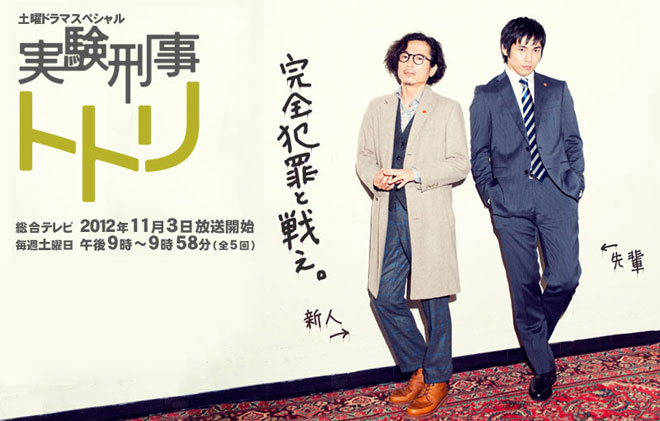 Story
43-year-old Professor Totori Hiroshi is a zoologist turned detective. Although his work studying forms of animal life at the university was fulfilling, he sat for the Tokyo Metropolitan Police Department’s mid-career recruitment exam, fueled by a desire to put his own abilities to use. He passed and is assigned to the First Investigative Division where 28-year-old detective Yasunaga Teppei is ordered to be Totori’s instructor. Yasunaga has a difficult time with this very stubborn, older rookie detective. They are an unlikely pair. An idiosyncratic newbie who applies logical thinking, constructs hypotheses and investigates with the meticulousness of an experiment and a righteous, scrupulous young detective. Meanwhile, the dead body of Akiko, the assistant of the famous culinary professional, Yuki Yukari, is found in the mountains. Yukari appeared on a television cooking show that was broadcast live at Akiko’s estimated time of death. On the other hand, Yukari’s husband Yasuhiko has no alibi. Totori decides prematurely that he is suspicious and this worries Yasunaga … …

Characters
Mikami Hiroshi as Totori Hiroshi
A rookie detective who has just passed the Tokyo Metropolitan Police Department’s mid-career recruitment exam. His former job was a researcher of animal life. An eccentric detective who applies his wealth of knowledge and logical thinking to form hypotheses, and proceeds with investigations with the meticulousness of an experiment. That is when he starts getting called ‘Experimental Detective Totori’ by the people around him. There are occasions when he is snide to Yasunaga Teppei.

Takahashi Mitsuomi as Yasunaga Teppei
A young detective with a strong sense of justice. He is haunted by a mistaken arrest that he made in the past. He is ordered by his superior, Mifune Takaaki, to be the instructor of the rookie Totori Hiroshi, but finds it a challenge. He starts to have a vague feeling that he is being taken for a ride by Totori.

Kuriyama Chiaki as Makorin
An idol who appears on a television programme that Totori Hiroshi and Yasunaga Teppei watch. She is a popular personality who not only goes on music programmes but also information programmes and talk shows.

Sasano Takashi as Mifune Takaaki
The superior of both Totori Hiroshi and Yasunaga Teppei at the First Investigative Division. He flatters Yasunaga who gripes about Totori and adroitly rolls him about in the palm of his hand.

This blog contains information and musings on current and upcoming Japanese dramas but is not intended to be comprehensive.
View all posts by jadefrost →
This entry was posted in Fall 2012 Dramas, NHK and tagged Jikken Keiji Totori Series, Kuriyama Chiaki, Mikami Hiroshi, Takahashi Mitsuomi. Bookmark the permalink.