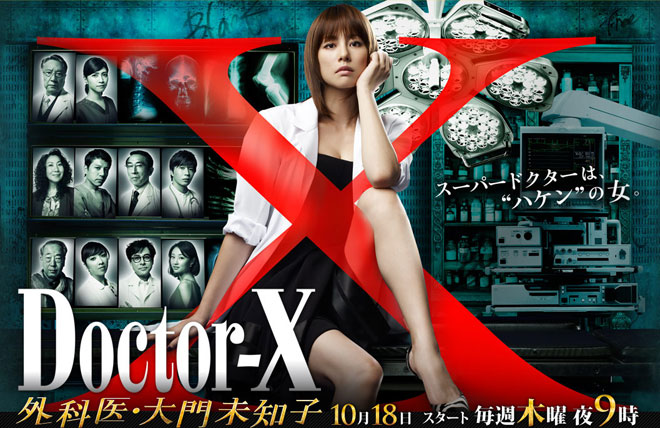 Story
Dressed in an outfit that seems incredible for a doctor, Daimon Michiko arrives at Teito Medical University’s Third Hospital with a letter of introduction. This leads to speculation that she is someone’s mistress. However, Michiko is a freelance surgeon. Because of the number of doctors quitting en masse due to the harsh working environment, she has come from a doctors’ agency as a replacement. Morimoto Hikaru, a new surgeon who sees her, cannot hide his surprise. The person who had performed emergency treatment on a patron that had collapsed at the club he happened to be present at the other night is none other than Michiko. It is not just her appearance that is unusual. Not long after her arrival, Michiko questions the surgery that the hospital director Kubo Shigeru is scheduled to perform. He has been out of touch with surgeries for a long time. She bluntly points out that his surgical techniques are outdated, making the people around her freeze in place. The issue Michiko raised is justified and anyone who is a doctor would have been concerned, but the reality is that at a university hospital no one would oppose a superior. She has antagonised those within the hospital. Michiko is stuck with chores for which a medical license is not necessary. However, as she had feared, the hospital director is greeted by an unthinkable situation when he starts performing the surgery … …

Characters
Yonekura Ryoko as Daimon Michiko
A freelance surgeon. Not affiliated to any university hospital’s medical department, she moves around to various hospitals while attached to the dodgy Doctors’ Agency. She observes working hours strictly, does not accept chores where a medical license is not needed, and is also uninterested in the power struggles characteristic of hospitals. Her private life and work experience is shrouded in mystery, her fees are several orders of magnitude higher but she is a battle-hardened first-rate surgeon. She has absolute confidence in her own skills. While there are ugly rumours that she left the medical community because of money problems and medical malpractice, no one knows the person she really is. Because she speaks her mind without hesitation, the staff of the medical department are ill at ease. Her interest is surgeries.

Tanaka Kei as Morimoto Hikaru
A rookie surgeon with the Second Surgical Department. The son of the owner of a general hospital in the countryside. He is clumsy with his hands and even though mastering the skills of a surgeon is a great struggle for him. He good-naturedly acknowledges Daimon Michiko’s skills as a surgeon, but does not undersand her words and actions, and keeps getting confounded by her … …

Uchida Yuki as Jonouchi Hiromi
An anesthetist and a single mother. A cool woman with proven capabilities. While she acknowledges Daimon Michiko’s skills as a surgeon, she keeps a certain distance from her.

Katsumura Masanobu as Kaji Hideki
A surgeon. An extremely skilled superdoctor, but is a faultfinding person. He sees Daimon Michiko as his enemy and picks on her flaws.

Kishibe Ittoku as Kanbara Akira
The director of Good Doctors Agency. A shady man rumoured to have once been a surgeon. His interest is mahjong.

Ito Shiro as Busujima Ryunosuke
The director of Teito Medical University’s Third Hospital. The former head of the surgical department, he has taken up this new post in place of the previous hospital director who was struck down by illness. A mysterious person. He hires Daimon Michiko who had once been fired, but it is not known if he is her enemy or ally.