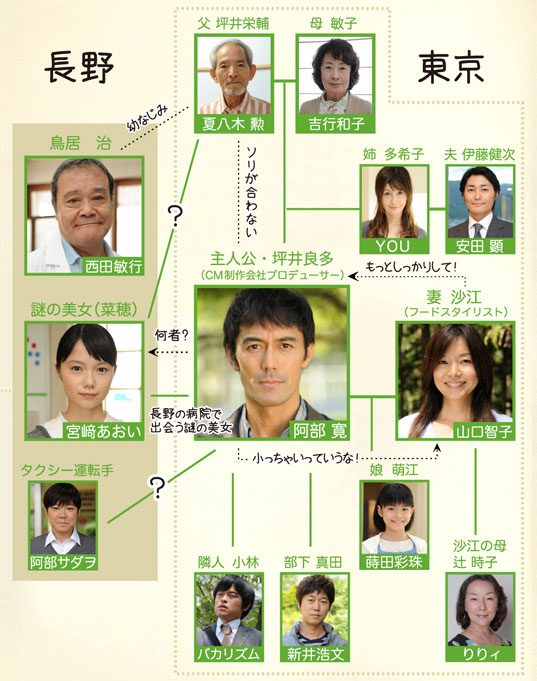 Abe Hiroshi as Tsuboi Ryota
A self-styled hotshot producer at a CM production company. It is an impressive title, but his merit is in fact to come into conflicts and get through it by soothing the parties. His colleagues sarcastically call him “Ma-kun” in secret. He overreacts to words like “little” and “useless”. Even at home, he is criticised by his capable wife Sae and daughter Moe who say that “he is weak for a big man”. His mother and older sister are forever treating him as the misbegotten eldest son. However, he is impossible to hate and a sweet man. He absolutely loathes bugs.

Yamaguchi Tomoko as Tsuboi Sae
Tsuboi Ryota’s wife. A much sought after food stylist (a job to make food ingredients and dishes appear more attractive in cook books, advertisements and movies) who has been in a great number of magazines. She has made the living room of their house into her workshop and studio. Because her motto is to manage work and keep house, she does not slack off in her work or household chores and is the type who will “combust” if there are difficulties. Her daughter Moe’s unfathomable words and behaviour is a constant source of worry. Although she occasionally makes fun of her husband who is unrealiable in some areas but has a nice and lovable personality, she loves him.

Miyazaki Aoi as Naho
A mysterious, beautiful woman who appears at the Nagano hospital room where Tsuboi Ryota’s father Eisuke has been warded. Could she be Eisuke’s illegitimate child? Or mistress? She is a key person who knows a lot about Eisuke which Ryota does not.

YOU as Ito Takiko
Tsuboi Ryota’s elder sister. A full-time housewife and mother of two children. She is a glib talker and is good at poking Ryota where it hurts. However, to Ryota, she is a person with whom he can talk about anything with honesty (of course in the end he would be talked down). She is not particularly dissatisfied with her current life, but there are times when she would think about the future.

Yasuda Ken as Ito Kenji
Ito Takiko’s husband. Although he is henpecked, he seems rather oblivious because of his positive and cheerful personality. His wife does not rely on him. It is something that he has in common with Ryota, and he feels a sense of affinity. He is excessively nice and cannot read between the lines.

Masuno Hidetomo (Bakarythm) as Kobayashi Satoru
A neighbour who lives in the same apartment building as Tsuboi Ryota and his family. He frequently joins Ryota at the entrance or bus stop when it is time to head off to work. He is snubbed by his wife and their junior high school daughter. At his workplace, he is a coordinator like Ryota. He loves gossiping about the troubles of others.

Arai Hirofumi as Sanada Jun
A junior at Tsuboi Ryota’s company. In contrast to Ryota, he holds ideals toward his job and is trusted by his boss. Although he is sick and tired of Ryota who is only interested in making it through work without incident, part of him is attached to Ryota and somehow finds him lovable.

Makita Aju as Tsuboi Moe
The daughter of Tsuboi Ryota and Sae. A fourth-grade elementary school student. As the only daughter of working parents, she is a bright and sturdy child who lives life her own way. She says that “there is a little man in the house” and gives her parents a lot of trouble. She also says things that shock the adults.

Natsuyagi Isao as Tsuboi Eisuke
Tsuboi Ryota’s father. The former director of a major drug manufacturer. After he retired at the age of 70, he became an advisor. Because he was devoted to the company, he neglected his family and has weak ties with Ryota and the others. He is good at his work and appears to have been a womaniser. There were a couple in the past which is known to his wife Toshiko.

Yoshiyuki Kazuko as Tsuboi Toshiko
Tsuboi Ryota’s mother. A big-hearted person who lives life her own way. Because of that, she even overlooked her husband’s womanising. She always worries about her weak son and watches out for him. Her hobby is haiku and she looks forward to attending the haiku gathering every Sunday.

Nishida Toshiyuki as Torii Osamu
The only dentist in the small town in Nagano Prefecture where Tsuboi Eisuke was born. He and Eisuke are childhood friends and they always played together as children, but something has caused them to grow apart.

This blog contains information and musings on current and upcoming Japanese dramas but is not intended to be comprehensive.
View all posts by jadefrost →
This entry was posted in Fall 2012 Dramas, Fuji TV, Going My Home and tagged Abe Hiroshi, Abe Sadao, Going My Home, Koreeda Hirokazu, Makita Aju, Miyazaki Aoi, Nishida Toshiyuki, Yamaguchi Tomoko, Yasuda Ken, Yoshiyuki Kazuko, YOU. Bookmark the permalink.