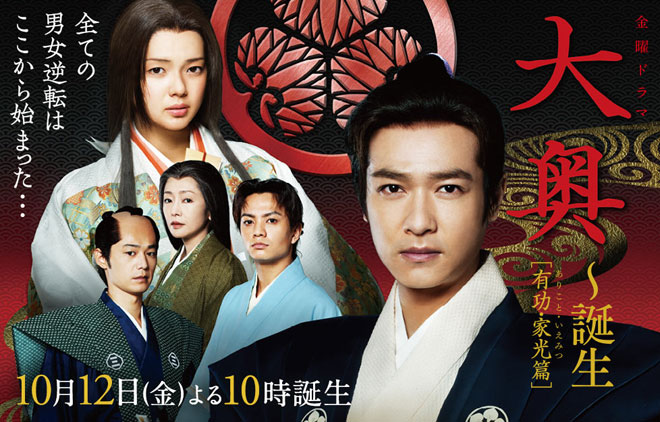 Story
During the reign of the third shogun, Tokugawa Iemitsu, an infectious disease called red smallpox spreads only among young men, causing the population of males in the country to plummet to one-fourth that of the population of females. Iemitsu himself passes away suddenly of this illness too. Fearing that the Tokugawa bloodline would be cut off, Iemitsu’s wet nurse Kasuga no Tsubone sends for a young girl whom Iemitsu sired outside Edo Castle, makes her dress as a boy and secretly brings her up as the shogun within the castle’s inner palace. When the girl is 13, she is violated by a bodyguard who is later beheaded. After that, the girl will not open her heart to anyone. When she turns 16 as Tokugawa Iemitsu, Kasuga no Tsubone forcibly detains the monk Madenokoji Arikoto who has come to Edo from Kyoto and presses him to return to secular life. Together with his disciple Gyokuei, Arikoto is made to serve in the inner palace as Iemitsu’s attendant. In an audience with Iemitsu, Arikoto is astonished to realise that the shogun is a female.

Characters
Sakai Masato as Madenokoji Arikoto
The good-looking third son of the court noble, Madenokoji, he left home to become a monk. He comes as the new head monk of Ise’s Keikoin to give thanks to the shogunate and catches the attention of Kasuga no Tsubone who forces him to return to secular life and become Tokugawa Iemitsu’s concubine. He stubbornly refuses, but some incident spurs his return and he enters the inner palace as Iemitsu’s attendant. Learning that a young girl is shackled to the unbearable fate of shogun, he decides to sacrifice everything.

Tabe Mikako as Tokugawa Iemitsu
Called shogun in the inner palace, she is actually the daughter of a woman whom Tokugawa Iemitsu assaulted during a walk around Edo at night. The only blood relation of the Tokugawas, she is secretly brought to Edo Castle’s inner palace by Kasuga no Tsubone after her father’s death and had been living in the inner palace dressed as a male. However, she is violated by a bodyguard and the child between them is dead at birth. She does not open her heart to anyone until the kindness of Madenokoji Arikoto touches her.

Tanaka Koki as Gyokuei
Madenokoji Arikoto’s disciple. His parents passed away before him and just before he died destitute, he was saved by Arikoto. Ever since then, he has had complete faith in Arikoto. He returns to secular life with him and becomes his dependent. He has the spirit to stand up against the bullying against Arikoto in the inner palace.

Hirayama Hiroyuki as Inaba Masakatsu
Kasuga no Tsubone’s biological son. He served as one of Iemitsu’s attendants in order to stand by his mother. After Iemitsu’s death, it is decided that he will “die” and act as Iemitsu’s body double.

Naito Takashi as Sawamura Denemon
Ostensibly an instructor of swordplay at the inner palace, he is in fact Kasuga no Tsubone’s watchdog who monitors Madenokoji Arikoto’s surroundings and does all her dirty work. One of the few people who know that Iemitsu is a girl.

Aso Yumi as Kasuga no Tsubone
Tokugawa Iemitsu’s wet nurse and the head of the inner palace. After the death of Tokugawa Iemitsu, she makes her son Inaba Masakatsu “die” and sends for Iemitsu’s hidden daughter and raises her as a boy. To keep the bloodline going, she supplies Iemitsu with a succession of handsome men including Madenokoji Arikoto.

This blog contains information and musings on current and upcoming Japanese dramas but is not intended to be comprehensive.
View all posts by jadefrost →
This entry was posted in Fall 2012 Dramas, TV Asahi and tagged Aso Yumi, Minamisawa Nao, Ooku Series, Sakai Masato, Tabe Mikako. Bookmark the permalink.