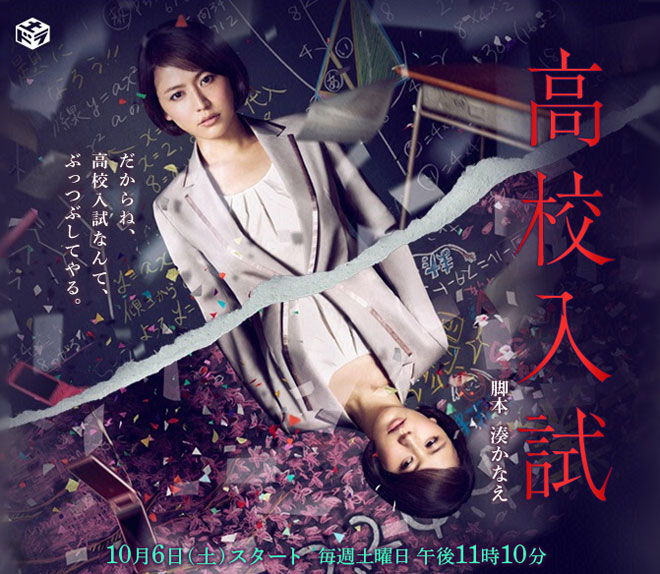 Story
Haruyama Kyoko, who was in charge of school excursions for high schools at a major travel agency, got it in her head to be involved in high school education and began work as an English teacher at Tachibana Daiichi Prefectural High School, otherwise known as Ikko, a year ago. It is now the entrance exam period, a first for Kyoko. Ikko is a prestigious local school and because the residents even favour Ikko more than Todai, Kyoko and her colleagues are preoccupied with preparations to make sure there will not be mistakes or irregularities. With the school entrance exam just days away, there is a frenzied atmosphere in the school. A meeting is held and Kyoko, Mizuno Fumiaki and Murai Yuji are assigned to be invigilators at the same venue. The son of the English teacher Matsushima Takashi is also sitting for the exam, so Matsushima is not involved in grading the papers this year. This unsettles Onishi Toshiya but Matsushima chides him with the reminder that they have Kyoko this year. After the meeting, Kyoko is asked by the music teacher Takimoto Midori to make a reservation at a popular Hokkaido resort hotel which she has trouble securing. Kyoko learns that the boyfriend Midori is going with is someone connected to the school. Then, on the day before the exam, Kyoko and the other teachers who are preparing the classrooms which will be the exam venue, discover a vellum paper tacked to the blackboard with the words “Down with the entrance exam!” scrawled in ink.

Characters
Nagasawa Masami as Haruyama Kyoko
An English teacher and form teacher of Class 2B. The invigilator in charge of exam room 2 (2B). She returned to Japan after living overseas up until the time she was in high school. After graduating from university, she was a tour guide focusing on school excursions at Taiyo Tourist. Then she set her sights on becoming a teacher and gained the necessary qualifications. There are times when she stands firm in her opinions and she tends to say what she thinks. Because she lived overseas for a long time, she cannot understand antiquated ideas that are uniquely Japanese.

Minamisawa Nao as Takimoto Midori
A music teacher and also the person in charge of the staff waiting room. An old girl of Sumiregaoka Girls High School. After graduation, she went to a college of music and became a music teacher. She is bold and also strong-minded, but has an easygoing side as well. She looks forward to travelling after the entrance exam ends.

Nakao Akiyoshi as Aida Kiyotaka
A physical education teacher, a student counselor and advisor to the volleyball club. An invigilator in charge of exam room 1 (2A). An old boy of Ikko. He is affable, glib, poor at contemplation and likes females. A student called Ishikawa Erina likes him.

Tokuyama Hidenori as Konishi Shunya
An English teacher and form teacher of Class 3A. An invigilator in charge of exam room 1 (2A). An old boy of Seikou Academy. Haruyama Kyoko’s supervisor. Highly educated, sensible and cool, he makes few mistakes. He is the most objective person among the teachers.

Saiki Shigeru as Ogino Masao
An information management teacher and the head of the entrance exams. An old boy of Ikko. He is not after power and has a low profile. Although tolerant and well-qualified for a supervisory role, he has been turning it down.

This blog contains information and musings on current and upcoming Japanese dramas but is not intended to be comprehensive.
View all posts by jadefrost →
This entry was posted in Fall 2012 Dramas, Fuji TV and tagged Koukou Nyuushi, Minamisawa Nao, Nagasawa Masami. Bookmark the permalink.