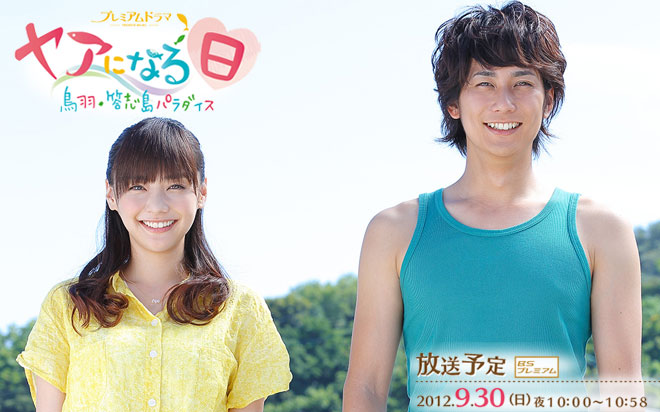 Date: From 9.00 p.m., 30 September 2012
Cast: Kurashina Kana, Hiraoka Yuta, Shiraishi Miho, Usuda Asami, Abe Ryohei, Okano Maya, Kokubo Toshihito, Igarashi Megumi, Kondo Masaomi, Shimizu Yutaka
Synopsis: Yamaoka Sachiko (Kurashina Kana), who works at a hotel in Toba City, Mie Prefecture is pregnant with the child of her boyfriend, Narumi Hisashi (Hiraoka Yuta). He is a chef at the same hotel and a native of Toshijima. Narumi tells her that he wishes to bring her back to Toshijima with him and become a fisherman. Hiding her pregnancy, Sachiko visits the island where she is introduced to the couple Iwanami Genzo (Kondo Masaomi) and Asako (Igarashi Megumi), who are Narumi’s “parents”. In fact, he loves them more than his own parents. In Toshijima, an old practice dating back to the Edo period is still carried out to this day. From junior high school days, boys will gather at a home to stay over night and “parents” are chosen to take care of them until they marry and become independent. Sachiko is taken aback by the unusual welcome by Narumi’s elder brother’s wife (Shiraishi Miho) and his friends (Shimizu Yutaka, Kokubo Toshihito). Then, she meets Hamamoto Miho (Usuda Asami). Like Sachiko, Miho is not from the island. She had met her husband Akira (Abe Ryohei) while working as a bus guide in Ise City, and married him. However, she cannot adapt to island life and also does not get on well with Akira. Sachiko gets anxious about the prospect of living on Toshijima as the wife of a fisherman. She discusses this with her junior at work, Tani (Okano Maya) but … …
Website: www.nhk.or.jp/tsu/yaa

This blog contains information and musings on current and upcoming Japanese dramas but is not intended to be comprehensive.
View all posts by jadefrost →
This entry was posted in Fall 2012 Drama Specials, NHK and tagged Hiraoka Yuta, Kurashina Kana, Shiraishi Miho, Usuda Asami, Yaa ni Naru Hi. Bookmark the permalink.