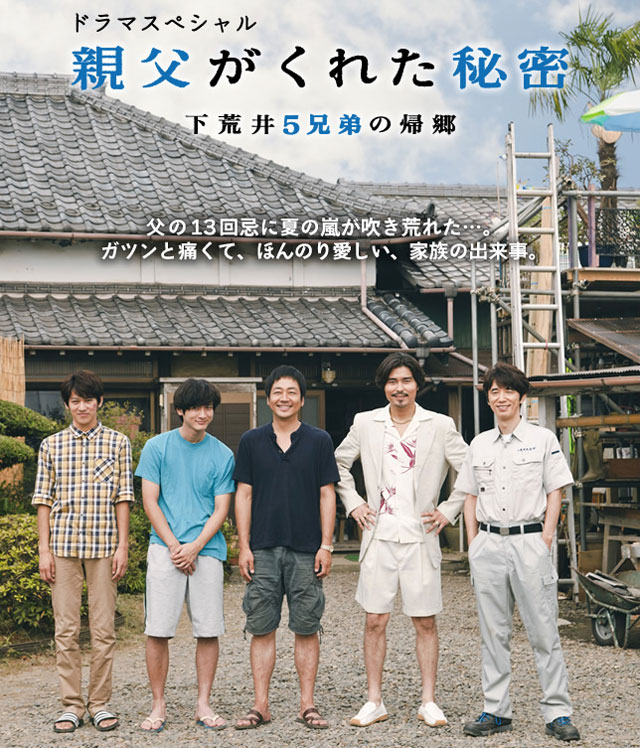 Story
The third son of the Shimoarai family, Kosuke, finds himself in a tight spot. The movie production company that he runs has not had a hit and while it is facing difficulty, a movie set is destroyed by typhoon and disrupts filming. If he is not able to manage the cash flow, the company will go bankrupt. Meanwhile, Kosuke secretly puts his wife Kayo and daughter Tomoko up at a hotel near his family home and goes back after a long absence, for the thirteenth anniversary of the death of his father, Sosuke. His agenda is to use the home that his father left behind as collateral to raise money … … On the same day, his youngest brother, Shu, who works in Tokyo, also returns home after a long while. However, he has injuries all over his body and his attitude is odd. Furthermore, Shu has for some reason refused the request of his fiancee Katayama Ikuyo to be introduced to his family and come back alone. His eldest brother, Taizo, who inherited the family’s tilemaking business, and fourth brother, an unemployed Kenji, live together at the Shimoarai family home. Tachibana Kiko and the brothers’ childhood friend Kawasaki Atsuko are overjoyed by their homecoming. seeing an opportunity, Kosuke tries to break the news to Taizo, but the timing is not good and he is not quite able to talk about his predicament. Then, their second brother Taiyo, who has been out of touch after an arrest for fraud, returns home. His sudden appearance leads to the revelation of the secret of the house that is their father’s legacy.

Characters
Omori Nao as Shimoarai Kosuke
The third Shimoarai brother. The president and producer of a movie production company, but he has not had a hit and the company is lurching towards debt. He secretly plots to use the family home left behind by his father as collateral to raise money.

Ozawa Yukiyoshi as Shimoarai Taiyo
The second Shimoarai brother. Because of his freewheeling personality, he moves from one seedy job to another. He has a criminal record for fraud. He left home on the tenth anniversary of his father’s death and remained out of touch for a long time.

Kora Kengo as Shimoarai Kenji
The fourth Shimoarai brother. A NEET (not in education, employment or training). He cannot find what he wants to do and goes on staying at home. He is unintentionally sarcastic to the people who are close to him.

Nagayama Kento as Shimoarai Shu
An A-student and the kind, affectionate youngest Shimoarai brother. He is working at a major Tokyo life insurance company and leads a comfortable life.

Santamaria Yusuke as Shimoarai Taizo
The eldest Shimoarai brother. He protects the old family home left behind by their parents and suceeds their father’s business, the ‘Shimoarai Tile Shop’. He has strong feelings for the family and family business. A strait-laced bachelor who does not have a way with words.

Hashizume Isao as Shimoarai Sosuke
The father of the five Shimoarai brothers, he ran a tile shop. He raised them single-handedly but died in an accident 13 years ago.

Satsukawa Aimi as Katayama Ikuyo
Shimoarai Shu’s fiancee. Her father is the president a large bank.

Hasegawa Kyoko as Shimoarai Kayo
Shimoarai Kosuke’s wife. She used to be a popular actress but retired a few years ago. She is half about to give up on the future of his company and the family. They have a daughter, Tomoko, who is a first year junior high school student.

Sudo Risa as Kawasaki Atsuko
The Shimoarai brothers’ childhood friend. She runs a cleaning shop nearby.

Yoshiyuki Kazuko as Tachibana Kiko
An elderly woman who lives in the neighbourhood. As an employee at the tile shop since the time of Shimoarai Sosuke, she would take care of the five Shimoarai brothers.