Posted on September 8, 2012 by jadefrost 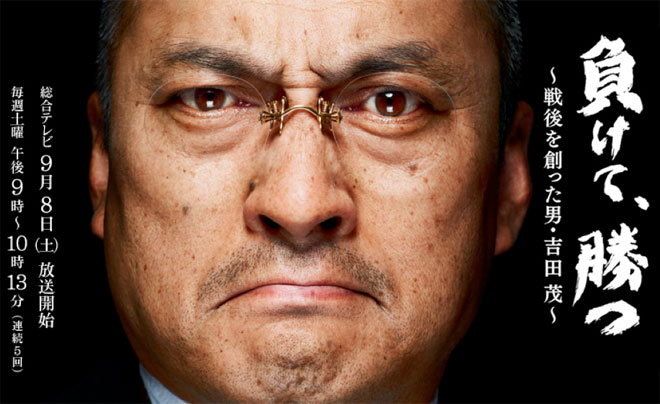 Story
In August 1945, General Douglas MacArthur arrives at the Atusgi airfield and begins the occupation of Japan. Yoshida Shigeru, the former ambassador to Great Britain, takes the position of Foreign Minister in place of the former minister who had incurred the displeasure of the Allied Occupation forces. His imprisonment during the war for being a pacifist helped. Yoshida has pride as his only weapon in dealing with MacArthur, the most powerful leader whom everyone fears. On the other hand, Yoshida’s long-time friend, the former prime minister Konoe Fumimaro is under pressure as a war criminal.

Characters
Watanabe Ken as Yoshida Shigeru
Japan’s Prime Minister from 1946. He would be in office for nearly 9 years. As Foreign Minister, he successively held the posts of vice foreign minister and ambassador to Great Britain. He persistently opposed war with Great Britain and the United States, and was imprisoned just before the end of the war for being a pacifist. This helps after the war, and he takes office as the prime minister after being the foreign minister. He crosses swords with General Douglas MacArthur, the most powerful man during the occupation period, and guides Japan to peace and independence.

David Morse as Douglas MacArthur
He controls Japan during the occupation as the supreme commander of the Allied forces. Born to a distinguished family in the east coast of the United States, he is full of pride. To convert Japan into a democracy, he orders the Japanese government to carry out various “GHQ reforms”. He enjoys tremendous popularity, but when the Korean War begins, he ends up at odds with US President Harry Truman and is removed from his post.

Matsuyuki Yasuko as Orin
A geisha who wins the favour of Yoshida Shigeru who likes to go to high-end Japanese restaurants. After the death of Yoshida’s wife, Yukiko, she takes care of him at his private residence in Oiso. She never appears in public, and does not even officially become his second wife, but supports him from the shadows.

Tanihara Shosuke as Shirasu Jiro
Yoshida Shigeru’s close aide. He holds his own against the Allied Occupation forces with Queen’s English and remarkable negotiation skills. Trusted like a family member, he is even willing to do the dirty work and continues to support Yoshida. On the other hand, he comes under criticism for closed-door politics. After the peace treaty is signed, his relationship with Yoshida is jeopardised because he proposed retirement.

Tanaka Kei as Yoshida Kenichi
Yoshida Shigeru’s eldest son. He is hostile towards his father who put work first at the expense of the family. He tries to make a career for himself in English translations and critique, but his income is not stable and he is forced to live in poverty. He places a distance between himself and his father who has become prime minister.

Nagai Masaru as Shibata Tatsuhiko
He joins the Foreign Ministry in the face of Japan’s defeat, and is unable to accept the country’s current situation of forgotten pride and submission to the United States. But because he has served under the Foreign Minister Yoshida Shigeru, who would become the Prime Minister, he has witnessed his diplomatic skills and deeply admires him.