Posted on September 6, 2012 by jadefrost 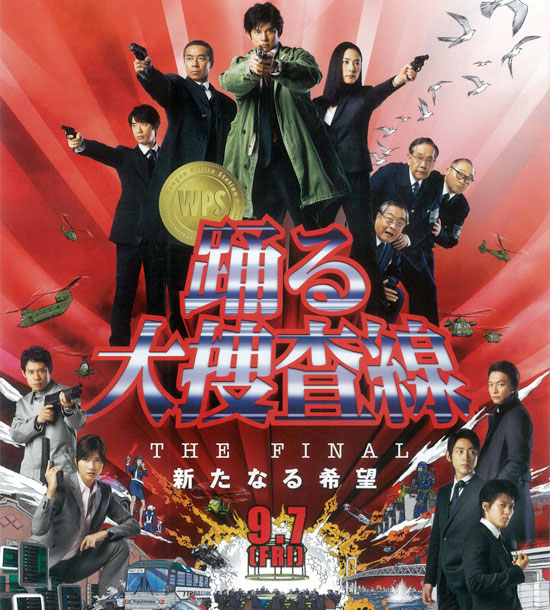 Broadcast
In theatres on 7 September 2012

Story
An international environmental energy summit will be held in Wangan Police Precinct’s jurisdiction, and the members of the precinct are mobilised to handle security. In the midst of this, a kidnapping occurs at the summit venue in full view of everyone. Several hours after the incident, the body of the victim is found shot dead. The weapon used is a gun that the police had seized. At a hastily convened investigation meeting, all the investigation information required is submitted in writing to Director Torikai Seiichi and the unprecedented investigation method of not disclosing any information on the precinct’s investigators as well as the gun used is announced. Then, a second person is killed. During the investigation process, Aoshima Shunsaku comes under suspicion and is given notice to resign. Furthermore, even the Tokyo Metropolitan Police’s Deputy Director General Muroi Shinji is swamped by the big organisational wave, and about to be relieved of his post. Even so, he, Aoshima and the investigators try their best to continue with the investigation. A third incident occurs as if to mock at them. Wangan Police Precinct chief Mashita Masayoshi’s son is kidnapped! Even though Aoshima’s position as a police officer has come under pressure, he desperately attempts to find out the truth despite his misgivings. Unknown to him, this investigation will be his biggest and final case … …

This blog contains information and musings on current and upcoming Japanese dramas but is not intended to be comprehensive.
View all posts by jadefrost →
This entry was posted in Odoru Daisousasen and tagged Fukatsu Eri, Katori Shingo, Mizuno Miki, Oda Yuji, Odoru Daisousasen, Oguri Shun, Santamaria Yusuke. Bookmark the permalink.