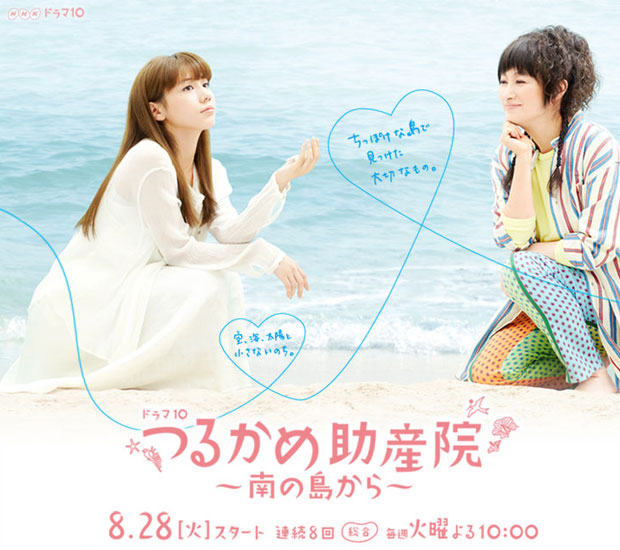 Story
Housewife Onodera Mariya’s married life was supposed to have been happy, but turns out shortlived when her husband Tatsuya suddenly disappears without a trace one year later. Mariya sees a picture postcard left by Tatsuya which shows a heart-shaped southern island, and recalls that he had spoken of wanting to go there. At her wits end, she heads to the island in search of him. When she visits, Tsuruta Kameko is there working at the island’s only maternity clinic. Kameko had come to this island from Tokyo a while back. A former midwife in Tokyo, she was disgusted with the mentality of frivolous girls who regarded abortion as reasonable, and the compromise in natural childbirth which was far from her ideal. Then one day, Kameko won a large sum of money in a lottery and left for a carefree journey by herself. This remote Okinawan island was the first place she visited. While there Nagai Akira beseeches her to take over the island’s maternity clinic. Learning that there was a shortage of midwives, Kameko decided to set up the ideal maternity clinic down there. These two women of different generations meet in the southern islands. As Mariya is touched by the warmth of Kameko and the islanders, she slowly opens her heart to them and confronts the issues she has.

Characters
Naka Riisa as Onodera (Anzai) Mariya
A beautician at a salon in Tokyo, she got to know Onodera Tatsuya through a matchmaking party. They got married and she quit her job to become a housewife. But as a consequence of her upbringing, her tendency to go along with Tatsuya and tendency to run away from issues worked against her. Their marriage gradually grew strained and Tatsuya suddenly left home a year later. She is unable to show her true self even to her mother, but she starts to change as she interacts with Tsuruta Kameko and the people of the heart-shaped Okinawan island.

Yo Kimiko as Tsuruta Kameko
A midwife at a Tokyo hospital. When she got disgusted with her job which was nowhere near her ideal of natural childbirth because of the hospital, she won a large sum of money in a lottery. She impulsively resigns from the hospital and visits the remote Okinawan islands as the first stop in her trip round the world. Through a strange turn of events, she opens Tsurukame maternity clinic. As she adjusts to island life, she becomes a magnanimous and dependable figure for the women of the island. However, she is for some reason inexperienced when it comes to the subtleties of gender.

Mizobata Junpei as Onodera Tatsuya
Onodera Mariya’s husband. It was love at first sight for him. He works as an interior designer at his company, but married life with Mariya is not working out. Moreover, his job is also not turning out as he wished. One day, he throws everything away and leaves home. At his favourite bar, a place called ‘Minamima’, he gets information on the island from the owner who is his confidant.

Nakao Akiyoshi as Amagi Satomi
An islander and staff at the Tsurukame maternity clinic who handles all chores including the serving tea. He is concerned about Onodera Mariya who is of his own age and more than a little jealous of her neglectful husband. He tries to treat people’s worries with sincerity, but at times goes around in circles.

Kaga Chikako as Anzai Ryoko
Onodera Mariya’s mother. A child of hers died in the past, and because of that, she is very concerned about Mariya. But on the other hand, in the case of Mariya, Ryoko has disagreeable points and the relationship between mother and daughter is strained.

Ito Shiro as Nagai Akira
An obstetrician at the island’s clinic who pushes his old bones hard. His hobby is fishing and he calls himself a famous octopus catcher. His personality is such that he cannot leave distressed females like Onodera Mariya alone. However, he knows little about the emotions of women and is still single. He has feelings for the rather strong-minded Tsuruta Kameko.

This blog contains information and musings on current and upcoming Japanese dramas but is not intended to be comprehensive.
View all posts by jadefrost →
This entry was posted in NHK, Summer 2012 Dramas and tagged Ito Shiro, Mizobata Junpei, Naka Riisa, Tsurukame Josanin, Yo Kimiko. Bookmark the permalink.