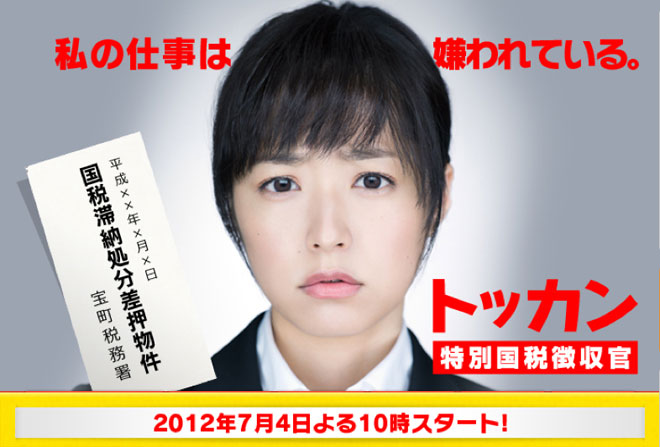 Story
Suzumiya Miki, a new tax collector working at the Takaracho Tax Office, goes to seize the house of Minagawa Isao who owes back taxes of 13 million yen since six months ago. However, Miki meets with a furious attack of salt and miso from Minagawa and his wife, Mariko. Just as she is forced to flee, her seniors, Nabeshima Yuko and Kamachi Toru, and a male stranger arrive to give assistance. The man is Kagami Masachika, a special national tax collector called a “tokkan”. Among the tax collectors empowered by the National Tax Collection Act to demand and enforce the collection of back taxes, the special national tax collectors are in charge of the worst of these cases and can search and seize without a warrant from the courts. Kagami mercilessly seizes the assets of the Minagawas including their beloved dog. Miki has misgivings about his heavy-handed tactics but is ordered by her superior, Kaneko Chojuro, to assist Kagami. She reluctantly accompanies him to the next place, Oshima Plastics, a factory that manufactures acrylic cases. Even though the company president and his wife work tirelessly, they remain mired in the red and owe some 6.5 million yen in back taxes. “You’re bullying the weak!” Miki can find no reply to this. At the same time, she is reminded of her own painful past … …

Characters
Inoue Mao as Suzumiya Miki
A Takaracho Tax Office tax collector attached to a special national tax collector. Her nickname is “Guko” because of her tendency to stutter “gu” when she cannot immediately express her thoughts. The person who gave her that name is her superior, Kagami Masachika. Some experience made her believe that “happiness = stability” and aspire to be a civil servant. She was made a tax collector at the tax office which was the only one that accepted her. One day, she was ordered to assist a special national tax collector. Pushed around by Kagami, who treats tax defaulters coldly, she resists. She was disowned by her father after she graduated from university.

Kitamura Yukiya as Kagami Masachika
A Takaracho Tax Office special national tax collector. He is self-centered and takes everything in his own stride. He always does what he likes with the people around him, but has never failed at collecting back taxes and seizures. He is a man recognised by all for his ability to gather information, make judgments and take action. Because of his piercing gaze and threatening tone, Suzumiya Miki secretly calls him “Husky”.

Suzuki Sawa as Nabeshima Yuko
A Takaracho Tax Office senior tax collector. Because of her appearance and personality, she is with the night shift team which is in charge of the clubs and bars in the Ginza neighbourhood. In the day, she does her office job and at night, she plys her trade. Guko’s confidant. With the encouragement of her mother, she has registered with matchmaking agencies and keeps going for dates. But she has not been able to meet man who measures up to her standard. She is popular with hosts and even finds herself scouted for a night job.

Kinami Haruka as Nanbu Chisa
A Tokyo Regional Taxation Bureau inspector. She is from the same batch as Suzumiya Miki’s and is her nemesis. She worked at the same tax office and lived in the same dorm as Miki during the training period. Everything about her is poles apart from Miki. Even though she has a friendly, attractive air about her popular with men, that is calculation on her part. She cannot accept it if she is not the first and very much hates to lose. On the other hand, she dislikes Miki for her submissive attitude. She takes an interest in Kagami Masachika who has created numerous legends at the taxation bureau and tangles with Miki over some matter in order to get close to Kagami.

Shiomi Sansei as Suzumiya Masujiro
Suzumiya Miki’s father. He ran a Japanese-style confectionary store in Osaka, but as the business ran into financial difficulties when Miki was a second-year high school student, he cooked the books on a sudden impulse and evaded tax. However, this was detected by the tax office which forced him to close the store in order to seize the assets. On the other hand, he learns that his daughter has become a tax collector, he disowns her in a fit of anger.

Wakamura Mayumi as Shirakawa Yoko
The proprietress of the Ginza club ‘Mio’. An exquisite, graceful woman befitting Ginza. She has a large circle of acquaintances in political circles, and is even well-liked by hostesses and hosts. Although she is single, she has no desire to get married and it is rumoured that a politician is her patron. The club’s business should be good, but there is not there is no money in her bank account. Where did the money go? Why is she behind on her taxes?

This blog contains information and musings on current and upcoming Japanese dramas but is not intended to be comprehensive.
View all posts by jadefrost →
This entry was posted in NTV, Summer 2012 Dramas and tagged Inoue Mao, Kinami Haruka, Kitamura Yukiya, Tokkan, Wakamura Mayumi. Bookmark the permalink.