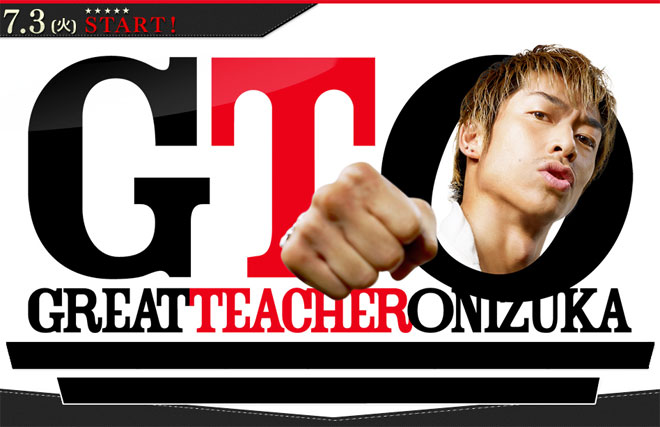 Story
One day, as part-time gardener Onizuka Eikichi is pruning a tree in the school yard at Meishu Academy, he sees Yoshikawa Noboru, a pupil of the academy’s teacher, Fuyutsuki Azusa, jump off the rooftop Onizuka calls out to Noboru, but the boy leaves in a haste. Noboru had been bullied two female classmates led by Uehara Kyoko, who had demanded money from him before their lesson. Meanwhile, Onizuka is talking to Sakurai Ryoko, a lady running a store on campus, when three indignant former students force their way in, claiming that they had been unfairly expelled from Meishu Academy. Vice principal Uchiyamada Hiroshi enlists the brawny Onizuka’s help, cursing and swearing at the three. Onizuka thought of assisting, but Uchiyamada’s behaviour angers him, and he ends up throwing Uchiyamada down with the German suplex, a wrestling technique. This is witnessed by Noboru, Azusa and Ryoko, who is actually the academy’s president … … After leaving the school, Onizuka asks his good friend, Danma Ryuji, the manager of a cafe, to get a job for three people. In the midst of this, Onizuka’s friend, the policeman Saejima Toshiyuki, brings in the suspicious-looking Noboru, who had been peeping into the cafe. The bullying incident is discussed. Onizuka becomes friends with Noboru and promises to help him.

Characters
AKIRA as Onizuka Eikichi
Meishu Academy’s social studies teacher and the form teacher of Class 2/4. A maverick former delinquent who dropped out of high school and used a stand-in to take the national university entrance exams and entered university. After that, he would visit Mishu Academy because he was its part-time gardener. His potential was discovered by the school’s president Sakurai Ryoko and he is employed as a part-time teacher. While he is reckless, he is a person who tries to listen to what is what rather than the theories under his nose. He has been invicible in fights with male opponents since student days and is charismatic too. He has a weakness for female high school students and each time he sees them, he has erotic fantasies.

Takimoto Miori as Fuyutsuki Azusa
Meishu Academy’s Japanese language teacher and the assistant form teacher of Class 2/4. She tries to understand the minds of students and strives to be a sincere and earnest teacher. Because of her sunny disposition, enthusiasm for education and beauty, she is popular with students as well as male teachers. Although she is at odds with Onizuka Eikichi, she identifies with his passion as a teacher.

Shirota Yu as Danma Ryuji
Onizuka Eikichi’s good friend since their Shonan days. He is now the manager of a cafe. He and Onizuka have such strong bonds that whenever either is in trouble, the other would come to rescue even at the risk of his own life.

Yamamoto Yusuke as Saejima Toshiyuki
Onizuka Eikichi’s junior. He was wild during high school days, but is now a police officer and works at a police box near Meishu Academy. He has been involved in numerous illegal activities such as the illicit sale of confiscated items. At times, he also helps Onizuka. He falls in love with Fuyutsuki Azusa at first sight.

Tayama Ryosei as Uchiyamada Hiroshi
Meishu Academy’s vice principal. Onizuka Eikichi’s natural enemy. He is typical of educators with little human touch, and nags about trivial things. On the other hand, he is ignored by both his wife and daughter, and is a man who has no place in his own home.

Kuroki Hitomi as Sakurai Ryoko
Meishu Academy’s president and principal. Through Onizuka Eikichi’s single-minded efforts to protect his students, she comes to discover what true education is. She sometimes disguises as an operator working at one of the stores on campus. None of the academy’s students realise who the president is.

This blog contains information and musings on current and upcoming Japanese dramas but is not intended to be comprehensive.
View all posts by jadefrost →
This entry was posted in Fuji TV, Summer 2012 Dramas and tagged GTO (remake), Kuroki Hitomi, Takimoto Miori. Bookmark the permalink.