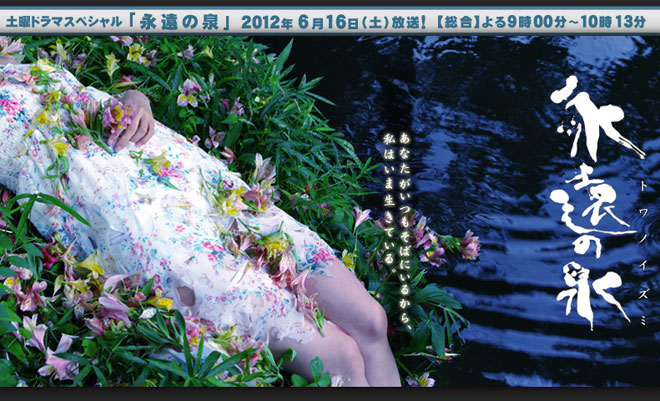 Date: From 9.00 p.m., 16 June 2012
Cast: Terao Akira, Suzuki Anne, Yamamoto Koji, Okunuki Kaoru, Tanaka Misako, Kohinata Fumiyo
Synopsis: In the spring of 2012 in Kumamoto Prefecture, the lawyer Yamauchi Akio (Terao Akira) agrees to be the court-appointed attorney for Kuramoto Yoji (Kohinata Fumiyo). Kuramoto was arrested on suspicion of murdering his ailing wife Yoshiko (Okunuki Kaoru) who suffered from cancer and was expected to live just four months. Begged by Yoshiko who wanted to walk with him around the places that held fond memories while she was still mobile, he went in an attempt to fulfill her wish and killed her at Mt Aso. Kuramoto has already confessed to the murder in a police interrogation, but Yamauchi has misgivings about his admission of guilt. He sets off for Aso, the scene of the murder, in order to trace the Kuramotos’ movements on the day of the incident. However, he unwittingly ends up running into his own daughter, Yuri (Suzuki Anne), who is hiking in the hills with her boyfriend, Terabe Toshiyuki (Yamamoto Koji), a struggling manga artist. Ever since Yamauchi’s wife Masae (Tanaka Misako) died 12 years ago, he and Yuri have not got along well with each other. Yuri still blames her father for turning his back and running away as Masae suffered from illness. He was even absent at her death. Sensing their strained relationship, Terabe arranges a trip for them, but far from bridging the gulf between father and daughter, it worsens matters. On the trip, Yamauchi grows increasingly convinced that Kuramoto did not kill his wife. The final case before his retirement should have been a simple one. However, in tracing the life of the Kuramotos to prove Kuramoto’s innocence, Yamauchi is forced to come to terms with a past that he had shut off.
Website: http://www.nhk.or.jp/dodra/dodrasp/index.html#d10

This blog contains information and musings on current and upcoming Japanese dramas but is not intended to be comprehensive.
View all posts by jadefrost →
This entry was posted in NHK, Spring 2012 Drama Specials and tagged Kohinata Fumiyo, Okunuki Kaoru, Suzuki Anne, Terao Akira, Towa no Izumi, Yamamoto Koji. Bookmark the permalink.