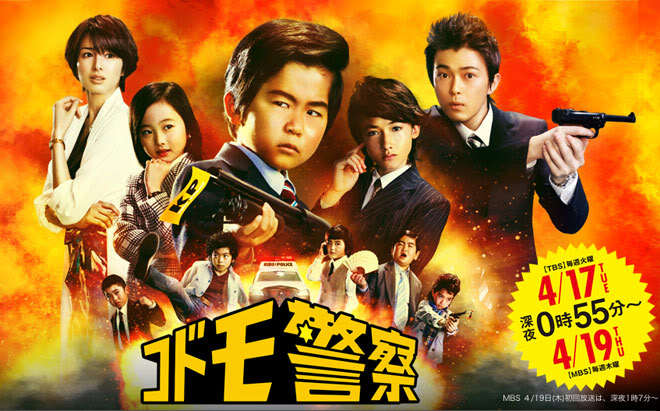 Story
Red Venus, a Yokohama-based organisation, has been the agent for many crimes. The Special Investigative Division of Kanagawa Prefectural Police’s Oguro Police Precinct was formed to arrest this evil syndicate. Its elite detectives quickly get something on Red Venus, and are now on the verge of catching the members in one fell swoop, but are captured in a trap. Confined in a warehouse by the harbour, they inhale a special gas developed independently by Red Venus. And then the strangest thing happens. They have become the size of children!!! With the addition of one adult rookie detective to the team, the Special Investigative Division presses on with the investigation to arrest Red Venus. In the midst of this, a murder occurs and Red Venus is believed to be responsible for it. The detectives interview eyewitnesses, bystanders; conduct stakeouts and interrogations as they attend elementary school. The suspects are narrowed down, but Red Venus is one step ahead of the detectives.

Characters
Suzuki Fuku as Chief Detective/Onuma Shigeru
The head of the Special Investigative Division of Kanagawa Prefectural Police’s Oguro Police Precinct. He cannot conceal that he has the presence of the detective of detectives even though he has become the size of a child. There is for some reason, an unusual air between him and Matsuda Rinko of the Forensics Division … …

Katsuji Ryo as Kunimitsu Shin
A rookie detective with the Special Investigative Division. He is assigned for investigations that put his life on the line each time because of the child-sized detectives. He seems to want a nickname quickly to show that he is a full-fledged detective.

Marius Yo as Hazama Seishiro
A career detective who works at the police headquarters. A hard-nosed person who is heartless in investigations. Because of that, he is disliked by the members of the Special Investigative Division.

Honda Miyu as Hayashi Maiko
The only female in the Special Investigative Division. Despite that, she has sharp retorts for the members of the team. Although being a detective is hard work, she has great female power. The words “around 30” are taboo to her.

Kichise Michiko as Matsuda Rinko
A career woman with the Forensics Division of Kanagawa Prefectural Police’s Oguro Police Precinct. Like her name suggests, she is a dignified mature woman, but is actually a character with a hot-cold personality. There is an unusual air between her and the head of the Special Investigative Division … …

This blog contains information and musings on current and upcoming Japanese dramas but is not intended to be comprehensive.
View all posts by jadefrost →
This entry was posted in Spring 2012 Dramas, TBS/MBS and tagged Honda Miyu, Kodomo Keisatsu, Suzuki Fuku. Bookmark the permalink.