Tsumi to Batsu ~ A Falsified Romance 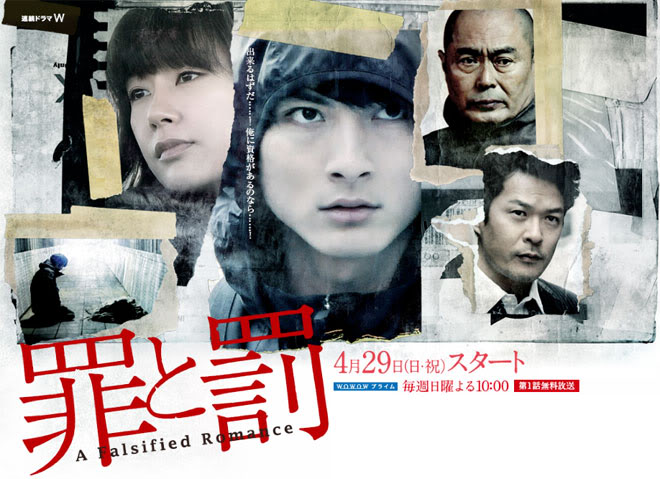 Story
University dropout Tachi Miroku has shut himself up in his own room. He is a young man with a bloated pride and hypersensitive inferiority complex. He has a horrifying plan in his mind. It is the murder of Baba Hikaru, a female high school student that controls a schoolgirl prostitution group. “Even if she lives, she will only be a pest who harms others and herself. Would it be a crime to have such pest removed? Pay the price in blood to achieve the objective.” Goaded by the voice inside his head, Miroku finally takes action. But right after he carries out his plan to kill Hikaru, Shimazu Risa, a schoolmate whom Hikaru treats like a dog, unexpectedly shows up at the scene of the crime and Miroku is driven into a corner by her actions … …

Characters
Kora Kengo as Tachi Miroku
A young man who aspires to be a novelist. He drops out of university and shuts himself at home.

Mizukawa Asami as Ameya Echika
A woman who changes Tachi Miroku’s destiny greatly. She has a tragic past.

Ito Ayumi as Tachi Yoshino
Tachi Miroku’s elder sister who supports the family after their father passes away.

Ibu Masato as Goi Kurodo
A public prosecutor who reads the novel that Tachi Miroku contributed to a literary magazine.

Manda Hisako as Tachi Yoshimi
The mother of Tachi Miroku and Tachi Yoshino. She places all her hopes on Miroku after her husband passes away.

This blog contains information and musings on current and upcoming Japanese dramas but is not intended to be comprehensive.
View all posts by jadefrost →
This entry was posted in Spring 2012 Dramas, WOWOW and tagged Hashimoto Ai, Ibu Masato, Kora Kengo, Mizuk, Tsumi to Batsu. Bookmark the permalink.