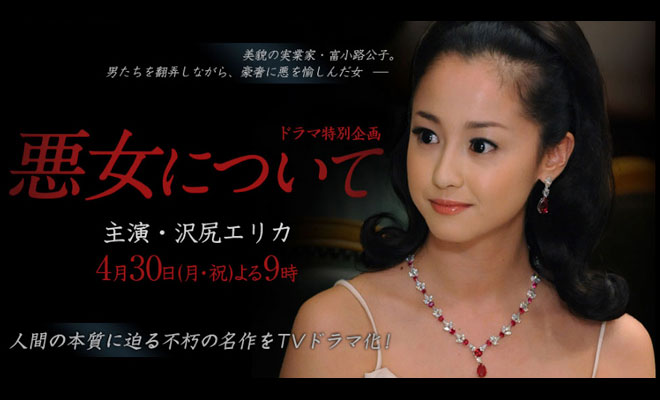 Date: From 9.00 p.m., 30 April 2012
Cast: Sawajiri Erika, Funakoshi Eiichiro, Azuma Chizuru, Yo Kimiko, Kamiji Yusuke, Nakahara Takeo, Takabayashi Yukiko, Watanabe Dai, Suzuki Sawa, Takahata Atsuko, Takahashi Hitomi, Izumiya Shigeru, Nishida Toshiyuki
Synopsis: In 1986, as Japan was in the midst of an economic boom that would give rise to the bubble economy, a businesswoman named Tominokoji Kimiko (Sawajiri Erika) fell to her death from a building. At 20, she entered the business world like a comet. She built a vast fortune in one generation. Called a talented woman as well as femme fatale, the much resented Kimiko died a mysterious death … … Was this a suicide or a murder? Various speculations fly about regarding her death. Even Sawayama Eiji (Funakoshi Eiichiro) who had known Kimiko since she was 15, could not comprehend it. Sawayama opened the jewellery store he had dreamed about using the money earned from a small ramen shop. He met Kimiko at the bookkeeping classes he attended in order to take up management studies. At that time, she had called herself Suzuki Kimiko. Kimiko showed him her mother’s brooch and asked for his opinion. That led to Kimiko’s part-time work at Sawayama’s ramen shop as well as his jewellery store. He fell in love with her, and before long, she became pregnant with his child. But at that same time, Kimiko also had a relationship with Watase Yoshio (Kamiji Yusuke), a university student working part-time at the jewellery store. However, Watase was told by Kimiko that she was pregnant. This upsets him and he disappears from her sight. And then there was Bito Teruhiko (Watanabe Dai), the son of a former noble family, who was staying with Kimiko’s mother, Tane. Kimiko soon gives birth and visits Watase’s family home with her baby. She obtained 50 million yen in cash and appeared in front of Sawayama’s wife, Michiyo (Azuma Chizuru), offering her the money to sell the ramen shop. Then, she changed her name to Tominokoji Kimiko and sarted a jewellery store. After that, she built her network of contacts, began to acquire a much greater amount of money and real estate, but … …
Website: www.tbs.co.jp/akujonitsuite

This blog contains information and musings on current and upcoming Japanese dramas but is not intended to be comprehensive.
View all posts by jadefrost →
This entry was posted in Spring 2012 Drama Specials, TBS/MBS and tagged Akujo ni Tsuite, Funakoshi Eiichiro, Nishida Toshiyuki, Sawajiri Erika, Yo Kimiko. Bookmark the permalink.