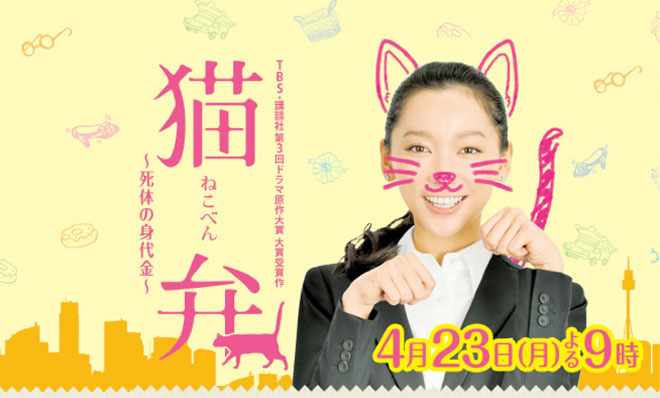 Date: From 9.00 p.m., 23 April 2012
Cast: Yoshioka Hidetaka, Anne, Yanagihara Kanako, Itaya Yuka, Arakawa Yoshiyoshi, Kimura Midoriko, Hayashibara Megumi, Iwamatsu Ryo, Shiomi Sansei, Ito Shiro (guest star), Watanabe Misako
Synopsis: 40-year-old bachelor Momose Taro (Yoshioka Hidetaka) is a talented lawyer with the nickname “Nekoben”. He has a sharp mind, but has for some reason, been getting many cases involving pets. The kind-hearted Momose cannot leave pitiful cats that he finds alone, and even lives with 11 of them at his lawyer’s office in Shinjuku. Separated from his mother when he was a child, Momose has a strong desire to have a family. But despite repeated arranged meetings undertaken by marriage agency employee, Daifuku Ako (Anne), he has unfortunately had 30 successive failures. One day, Momose is accosted by an old shoeshine lady (Watanabe Misako) who polishes only one of his shoes. At a funeral parlour, the service for the chairman of a major shoe manufacturer is being carried out in silence. After Okouchi Susumu (Iwamatsu Ryo), the chairman’s son and chief mourner, finishes his speech, an incident occurs! The hearse carrying the coffin drives away without its driver. An uproar ensues. A day after the photo of “Nekoben ~ Ransom for Dead Body”, Momose receives a request to solve this case. It seems like the family of the deceased is unable to report this to the police. Okouchi discloses that he received a phone call instructing him to pay ransom of 15.4 million yen for his father’s body and entreats Momose to solve the case quietly. Momose infers who the criminal is, based on the little information that he has, but … …
Website: www.tbs.co.jp/nekoben

This blog contains information and musings on current and upcoming Japanese dramas but is not intended to be comprehensive.
View all posts by jadefrost →
This entry was posted in NTV, Spring 2012 Drama Specials and tagged Anne, Nekoben Series, Yoshioka Hidetaka. Bookmark the permalink.