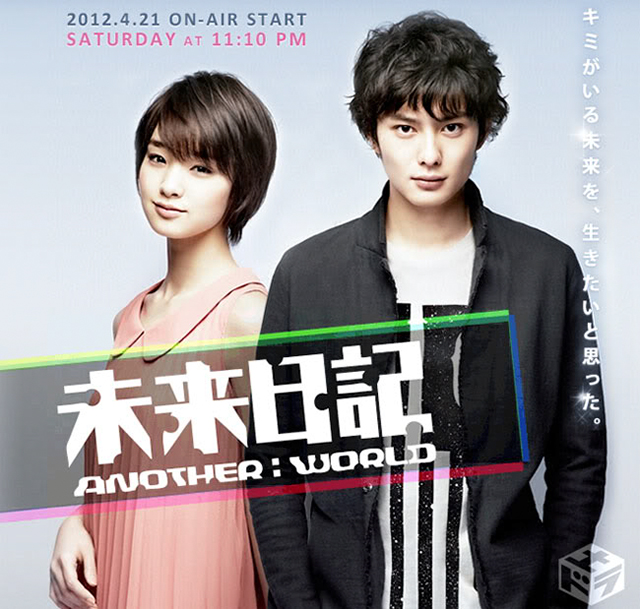 Story
Hoshino Arata, a third year university student who feels that hard work alone is useless and that the future cannot be changed, is the personification of going with the flow. He drifts through each day even though it is the job-hunting period. One day, Arata is at a cafe on campus when his classmate Moriguchi Rui brings materials from a job placement seminar to him. But Arata appears uninterested. Then Kosaka Ouji, a junior who worships Arata, comes by and as the three of them are talking, Rui spills a drink on Arata’s mobile phone. Ouji tries to go and get something to wipe the phone but ends up trampling on it. So Rui passes Arata an exclusive chronos smart phone which he has two sets of. Arata seems happy because he has always wanted this phone. When he returns home, he casually installs the application for the diary and enters the words, “I don’t want to think of the future”. The next morning, something odd happens to Arata. The diary which he had not written has been updated. Furthermore, what is being written is not about the past but about the future. The smart phone that Rui had passed to Arata is a “future diary”. This puts Arata in high spirits. At that moment, a lovely, mysterious girl called Furusaki Yuno appears in front of Arata. Like Arata, Yuno is also the owner of a ‘future diary’ and blindly in love with Arata. She knows everything about him and will surely appear wherever he goes. Yuno’s strange behaviour bewilders Arata. She even deals him a blow. For some reason, the words “Hoshino Arata, dead end” shows on the ‘future diary’. Arata has been forced to participate in a survival game with six other owners of the ‘future diary’. At the planetarium, they listen to instructions from “Deus”. The seven owners of the ‘future diary’ will kill each other until one person is left. “Dead end” will be indicated for the persons whose death have been determined, and they have to bring down the other owners or destroy the ‘future diary’ to reverse the “dead end”. The time limit is one month and if the victor is still not decided by that time, everyone will be out of the game. Yuno tells an unnerved Arata that she will make the others disappear.

Characters
Okada Masaki as Hoshino Arata
An apathetic third year university student who feels that hard work alone is useless and that the future cannot be changed. One day, he obtains a ‘future diary’ when his good friend Moriguchi Rui loans him a smart phone from Chronos Seed Corporation. He becomes its owner and his quiet life changes when he is thrust into a game of survival.

Goriki Ayame as Furusaki Yuno
One of the owners of a ‘future diary’. She idolises Hoshino Arata to the extent that she will appear wherever he goes, just like a stalker.

Hongo Kanata as Moriguchi Rui
A third year university student who is in the midst of job hunting. Hoshino Arata’s good friend. He is very concerned about Arata whose life is in a rut. In order to protect his younger sister’s life, he obeys orders without knowing the reasons, and passes the smart phones to Arata and Furusaki Yuno.

Fukuda Mayuko as Okie Haruna
Moriguchi Rui’s younger sister. A first year university student. She went missing because of some incident and as a result of that Hoshino Arata, Furusaki Yuno and other people get caught up in a cruel fate.

Kikuchi Fuma as Kosaka Ouji
A first year university student and junior of Hoshino Arata and Moriguchi Rui. He entered the same university because he adores Arata. He gets carried away easily and has a cheerful personality.

Okada Yoshinori as Hagito Kinjiro
A detective at Sakurami Police Precinct, and owner of a ‘future diary’.

Mitsuishi Ken as Hoshino Kuro
Hoshino Arata’s father and owner of a ‘future diary’. An employee of Chronos Seed Corporation.

This blog contains information and musings on current and upcoming Japanese dramas but is not intended to be comprehensive.
View all posts by jadefrost →
This entry was posted in Fuji TV, Spring 2012 Dramas and tagged Fukuda Mayuko, Mirai Nikki, Mitsuishi Ken, Okada Masaki. Bookmark the permalink.

1 Response to Mirai Nikki ~ Another World