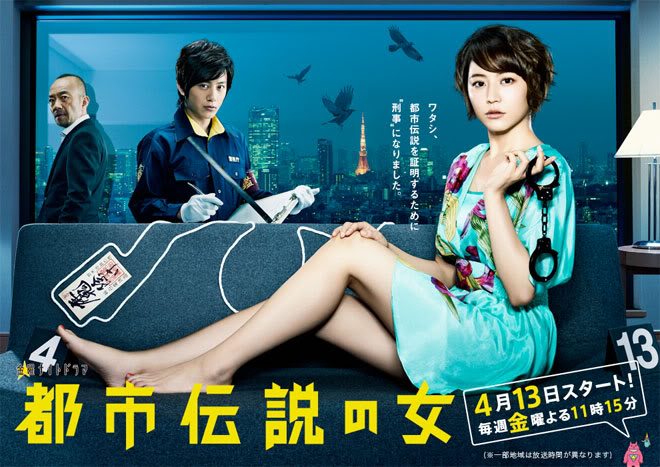 Story
The first day that detective Otonashi Tsukiko takes up her her post at the Tokyo Metropolitan Police Department’s First Investigative Division, she appears in a miniskirt and speaks enthusiastically but without coherence about the illogical Toshi Densetsu. This leaves her boss, Tannai Ichio, and colleagues dumbfounded. On this day, the dead body of Fujisawa Masafumi, an employee of Hagino Denko at Otemachi, is found. The place where the body was discovered is a back alley adjacent to Hagino Denko’s building. Fujisawa’s shoes is at the building’s rooftop. According to section manager Hagino Ryoichi, Fujisawa had a rigid personality. While he was alive, he had not got along well with the division manager, Yoshida Kazuyoshi, and was troubled by it. There is no suicide note near the scene of Fujisawa’s death, but it becomes apparent from the situation that he had probably jumped to his death. However, Tsukiko, who examines the scene with Tannai and fellow team member Shibayama Toshiya, discovers that Fujisawa’s face was angled toward the grave of Taira no Masakado nearby. There have been many anecdotes about Taira no Masakado’s rumoured curse since the olden days. It should be the “sacred place” in Toshi Densetsu. “Maybe this case has something to do with Toshi Desetsu.” Tannai and Shibayama are astonished by Tsukiko’s absurd remark. But Tsukiko, the Toshi Densetsu enthusiast, ignores their response and suddenly gets motivated. Hearing the female employees of Hagino Denko gossip that Fujisawa’s death was due to Masakado’s curse, Tsukiko gleefully joins in their conversation and gathers information. One of the female employees, Sekiguchi Chiho is angered by Tsukiko’s excitement which she regards as improper … … After that, a suicide note is discovered at Fujisawa’s home. However, Tsukiko does not believe that Fujisawa had willingly taken his own life. Keen to prove that it was Masakado’s curse, she enlists the help of a crime lab officer, Katsuura Hirohito, who has been following her around ever since he fell in love at first sight with her, and secretly begins her own investigation. Before long, Tsukiko gets hold of new Toshi Densetsu-related information on Fujisawa, and visits someone … …

Characters
Nagasawa Masami as Otonashi Tsukiko
A detective with the First Investigative Division’s Team Tannai. A Toshi Densetsu enthusiast who openly declares that she became a detective in order to bear testimony to Toshi Densetsu. She believes that every case is connected with Toshi Densetsu and because of that, she thinks that the greater part of formal investigations are wrong. She will covertly proceed to probe them with Toshi Desetsu as the theory by feigning illness. This angers her superior, Tannai Ichio each time. She is a natural at cajoling people and makes use of this ability to get parties involved in cases to open their hearts and secretly let her into places that are out of bounds. She dreams of officially announcing some day that Toshi Densetsu is involved in a case she investigated.

Mizobata Junpei as Katsuura Hirohito
A forensics officer of the Tokyo Metropolitan Police Department. He was at a local police station’s forensics department until very recently, but was transferred to the headquarters in April and fell in love at first sight with Otonashi Tsukiko whom he encountered at a crime scene. When he tries to communicate with Tsukiko, he struggles to talk about Toshi Desetsu, but because his knowledge is superficial, he cannot quite keep up. As long as it is for Tsukiko’s sake, he will take the initiative and keep her company even in absurd investigations. He is a straightforward guy who would immediately reply, “Her looks!” when asked what he likes about Tsukiko. He has excellent memory and is well-organised, but cannot tolerate objects in disarray and goes a little too far in tidying crime sccenes. Every day, he battles with inner conflict over his worthiness to be a crime lab officer.

Takenaka Naoto as Tannai Ichio
A detective with the First Investigative Division and the leader of Team Tannai. Otonashi Tsukiko’s boss. He had solved numerous difficult cases with his sharp detective instinct over the years … … But lately, that instinct has started to get off the mark, to the extent that the people around him have been quietly gossipping that “Tannai’s intuition has slipped” … … The man himself has also started to notice it a little and even gets anxious in investigations. He has been trying many health tips and supplements these days in order to strengthen his mind and body and get his sharp instinct back, but they have not been effective.

Hirayama Hiroyuki as Shibayama Toshiya
A detective with the First Investigative Division’s Team Tannai. He idolises Tannai Ichio who was once said to be a famous detective. He is bewildered by the investigation methods of his junior, Otonashi Tsukiko, but always finds great joy in working alongside Tannai.

Takuma Takayuki as Gohara Yuichi
The leader of the First Investigative Division’s Team Gohara. An ace detective described as the most capable man in the First Investigative Division. He is always assigned the main work and when he does not have enough manpower, he will recruit Team Tannai’s help. He is hopelessly in love with Tsukiko’s feminine charm.

Akizuki Narumi as Otonashi Miyako
Otonashi Tsukiko’s younger sister who lives together with her. A university student. Unlike Tsukiko, she is skeptical of Toshi Densetsu. Because she is level-headed, she is skilled at handling her sister who gets heated up over Toshi Densetsu. Forced to cooperate with creating Tsukiko’s alibi each time she is late or absent from work because of her own investigation, Miyako fondly watches over her sister.

Utsui Ken as Oguri Ryutaro
A mysterious person who appears before Otonashi Tsukiko. A dapper old man who dresses in a men’s kimono.

This blog contains information and musings on current and upcoming Japanese dramas but is not intended to be comprehensive.
View all posts by jadefrost →
This entry was posted in Spring 2012 Dramas, TV Asahi and tagged Ibu Masato, Mizobata Junpei, Nagasawa Masami, Toshi Densetsu no Onna Series. Bookmark the permalink.