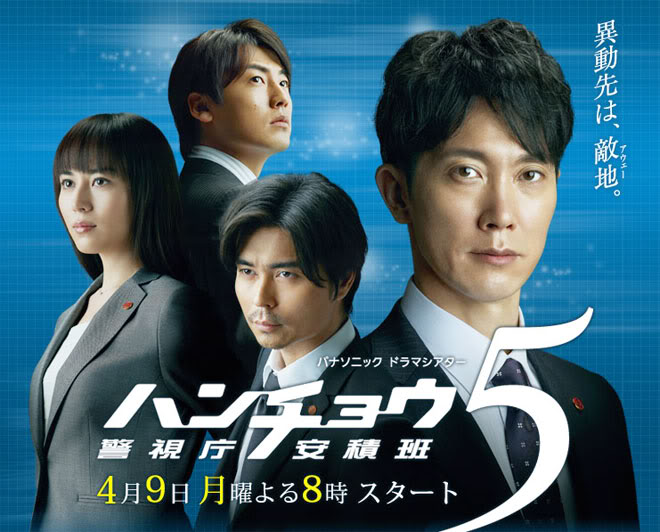 Story
A man arrives at the Tokyo Metropolitan Police Department carrying his possessions in a cardboard box. That man is Azumi Tsuyoshi, who has been transferred from Jinnan Precinct to the First Investigative Division’s Special Investigations Unit. It is a newly-created unit under the auspices of Kawaguchi Sotaro, the head of criminal investigations. However, not long after it was set up, the unit was being treated like a subcontractor by the First Investigative Division. Mayama Toko, who is popularly known as the “iron woman” and is the first female to head the First Investigative Division, learns that the Special Investigations Unit reports directly to him and has suspicions about his true intentions. She presses him to disband the unit if they blunder … … One day, Assistant Inspector Ozaki Makoto, and officers Yuki Saori and Koike Tatsuya, who were transferred to the unit earlier than Azumi, stakeout a stadium carpark for a transaction on smuggled guns, on their own. If they arrest the parties in the act of committing the crime, it will be their first commendable achievement before Azumi takes up his new post. However, a girl with her family happens to step between the criminals, and Saori is taken hostage when she dashes out in an attempt to save the girl. They end up in a stalemate and the situation is communicated to the Tokyo Metropolitan Police as a seige. The the Special Investigations Unit and Azumi are mobilised. At the same time, news of the incident also reaches the media. CNC TV’s newscaster Nishimori Naoko is sent to the scene with broadcasting crew. The scene is completely surrounded by the police. Azumi arrives amidst the chaos and observes the situation. Toko reprimands him for not knowing what his subordinates are doing, but Azumi has no grasp of the matter and is completely bewildered … …

Characters
Sasaki Kuranosuke as Azumi Tsuyoshi
Head of the Special Investigations Unit of the Tokyo Metropolitan’s Police Department. Rank: Assistant Inspector. Former head of the Violent Crimes Section of Jinnan Precinct. He received a direct transfer order from Kawaguchi Sotaro, the head of criminal investigations. He was too devoted to his work and paid no attention to his family. As a result, his marriage ended in divorce. He lives alone and looks forward to the occasional meetings with his only daughter, Ryoko.

Higa Manami as Yuki Saori
A member of the Special Investigations Unit of the Tokyo Metropolitan’s Police Department. Rank: Officer. The only female in the unit. She is strong-willed and a big eater who is particularly fond of ramen and gyoza. She is on good terms with Kimura Chiharu of the Forensics Division.

Ozawa Yukiyoshi as Ozaki Makoto
A member of the Special Investigations Unit of the Tokyo Metropolitan’s Police Department. Rank: Assistant Inspector. He is a man who believes that “rules” and “teamwork” is not everything and is willing to go against an order if he thinks that his own judgement at a scene is correct.

Fukushi Seiji as Koike Tatsuya
A member of the Special Investigations Unit of the Tokyo Metropolitan’s Police Department. Rank: Officer. He is not exactly bad at socialising. It’s just that he is one of the young people of today who values his private life. He and Yuki Saori were from the same batch at the police academy.

Satomi Kotaro as Kawaguchi Sotaro
Head of Japan’s criminal police. Rank: Superintendent Supervisor. He created the Special Investigation Unit, which can quickly and freely investigate cases with the aim of invigorating the police organisation. However, the true reason for the establishment of the Special Investigations Unit is not known to anyone within the police, except him.

This blog contains information and musings on current and upcoming Japanese dramas but is not intended to be comprehensive.
View all posts by jadefrost →
This entry was posted in Spring 2012 Dramas, TBS/MBS. Bookmark the permalink.