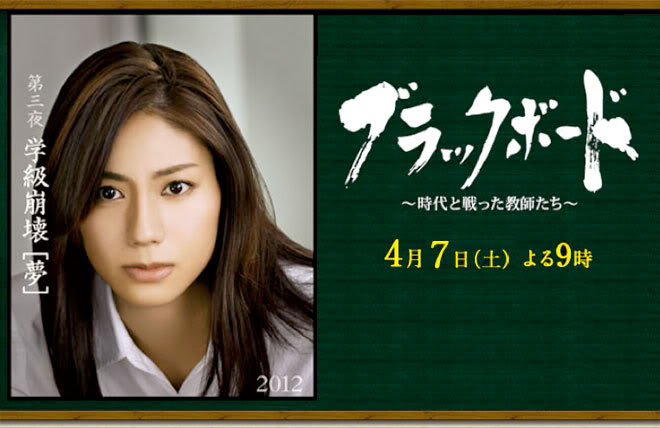 Story
In 2011, the junior high school in Ota Ward experiences a complete breakdown in classroom discipline. Takizawa Momoko, an English teacher in charge of the third-year students, writes the words “My dream” on the blackboard, but it is in vain for no one participates in the lesson. Even so, Momoko perseveres in reaching out to her students. Yokote Ryoko, the present school principal who was once colleagues with Goto Akira, is supportive of her. One day, Momoko learns that Omiya Masaki, an extremely defiant transfer student, has not received adequate education because of his family situation, and gives him personal coaching, but … … she is critised for forming an inappropriate relationship with a student. How does she talk about “love”, “dreams” and the “meaning of school”?

Characters
Matsushita Nao as Takizawa Momoko
Her class is disrupted under the influence of one transfer student, Omiya Masaki, and she loses confidence in continuing as a teacher. However, learning the reason why Masaki behaves this way makes her realise that each student is different. And so, in complete contrast to her attitude thus far, she tries to reach out to her students. Even though she is criticised by students and parents for being partial to only one student, she presses on with what she thinks is right. As a consequence, she comes under increasing pressure.

Kamiki Ryunosuke as Omiya Masaki
A student who has transferred into Class 3/2 which Takizawa Momoko is in charge of. He has a defiant attitude and always goes against his teacher by saying “I don’t know”. But there is a secret behind that … …

Kato Shigeaki as Kumatani Shota
A mathematics teacher and the assistant form teacher of Class 3/2. A modern man who loves music, but desires to avoid trouble from his teaching job, by snuffing out his own individuality and playing the ideal teacher. However, he sees Takizawa Momoko’s earnest efforts and realises the importance of reaching out to his students, and becomes more cooperative.

Matsui Jurina as Hirokawa Manami
She used to be a student who would earnestly listen to what teachers say, but is influenced by the defiant Omiya Masaki and gradually grows shuts out Takizawa Momoko’s words. She grows disgusted with Momoko who only cares about exams and warns them not to take school studies lightly.

Toda Keiko as Omiya Kyoko
Omiya Masaki’s mother. She has no husband and thinks that education is not necessary for her son. She would abandon her child and leave home often.

Baishou Mitsuko as Yokote Ryoko
A former English language teacher at the school. She recommended a demoralised Takizawa Momoko to take a leave of absence for a while. However, she sympathised with Momoko’s strong desire to try to reach out to the students again, and agreed to let her be in charge of them until their graduation.

This blog contains information and musings on current and upcoming Japanese dramas but is not intended to be comprehensive.
View all posts by jadefrost →
This entry was posted in Spring 2012 Drama Specials, TBS/MBS and tagged Blackboard, Kamiki Ryunosuke, Matsushita Nao, Toda Keiko. Bookmark the permalink.