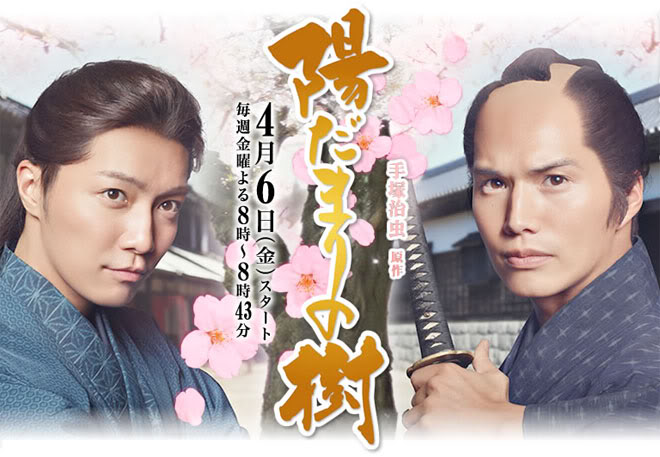 Story
It is 1855, the year following the Treaty of Peace and Amity between the United States and Japan. 26-year-old samurai Ibuya Manjiro succeeded his father and has been serving at the Hitachifuchu domain’s residence for four months. He trains more seriously than everyone else to the extent that he gets on the wrong side of the other samurais. On the other hand, Tezuka Ryoan, a doctor of Western medicine, distresses his father Ryosen who practises at a public clinic in the Hitachifuchu domain, because of his womanising. One day, Manjiro who has joined the training hall of Chiba Shusaku, encounters trouble with his fellow pupils. He crosses swords with a senior pupil and sustains a severe gash after a hard fight. Ryoan visits a reluctant Manjiro in place of his father and stitches up the wound. While this is in fact his first surgery, he handles it with an unerring hand. The knowledge that Ryoan is also romantically interested in Oseki, chafes at Manjiro for he secretly loves her and vows to protect her chastity. But when Ryoan is attacked by a samurai, Manjiro promptly cuts him down. That person is none other than the senior pupil at Chiba’s training hall.

Characters
Ichihara Hayato as Ibuya Manjiro
A boorish, single-minded samurai who serves the Hitachifuchu domain (present day Ishioka City in Ibaraki prefecture). His great dislike of dishonesty, which he took after his father, is perhaps a handicap and he is far from making his way in the world although he possesses self-taught sword skills that can defeat all swordsmen present. While troubled by the increasingly corrupt Tokugawa shogunate which is about to fall to ruins, he makes up his mind support it. A man of integrity, he lives life his own way in this period of turbulence, showing grit for trying to protect his country. Before long, he gets involved in the establishment of the shogunate’s infantry because of his a role as guard for American emissaries. His destiny gets intertwined with the shogunate until the end.

Narimiya Hiroki as Tezuka Ryoan
A doctor of Western medicine and Tezuka Osamu’s great-grandfather. He studied Western medicine at a private school for Western studies in Osaka set up by Ogata Koan in the late Edo period. Ryoan and his father, Ryosen, played an active in the establishment of a vaccination clinic which later became the Faculty of Medicine of Tokyo University. Ryoan is the polar opposite of the honest Ibuya Manjiro. But while he maybe a womaniser with a devil-may-care attitude, he is also a compassionate person who will devote himself to saving the lives of patients during emergencies. This compassion moves Manjiro who starts out antagonistic, and the two of them become lifelong friends. He detests samurais and war, but he is pushed by the tide of the times to go off to the battlefront as a military doctor.

Kurokawa Mei as Oseki
The daughter of the head of Zenpukuji. Both Ibuya Manjiro and Tezuka Ryoan secretly love her. She is considering her father’s earnest request that the person who becomes her husband takes over the temple. She dislikes fights and does not have a good impression of samurais who kill people. Because her younger brother died of smallpox, she offers to help Ryoan who is trying to promote a vaccination against smallpox to Edo. She wavers between Majiro and Ryoan, but some incident leads her to enter a nunnery.

Otsuka Shinobu as Otsune
Tezuka Ryoan’s wife. After Ryoan made a move on her on a sudden impulse along the road from Osaka to Edo, she became his wife. Because she is strong-willed and level-headed, she disciplines and supports her irresponsible, weak husband.

Fueki Yuko as Oshina
A merchant’s daughter who was saved by Ibuya Manjiro in the Great Ansei Earthquake. She wishes to be Manjiro’s wife, but is raped by the swordsman Ushikubo Tobe and becomes pregnant. She endures the status of Tobe’s wife to keep him from attacking Manjiro.

Otsuka Chihiro as Aya
The younger sister of Kusunoki Otojiro. Ibuya Manjiro is her brother’s enemy, but her heart wavers at his devotion. She tries to save Manjiro who is fighting against Ushikubo Tobe by volunteering her life and ends up in a coma. However, she makes a miraculous recovery as a result of his tender care.

Tsugawa Masahiko as Fujita Toko
A samurai of the Mito domain (modern day Ibaraki prefecture) whom Ibuya Manjiro worships. As an authority on studies and academic traditions that originated from Mito, he wielded influence on imperial loyalists nationwide, and was Manjiro’s pillar of emotional support. After urging Manjiro to be “supportive of the big tree that has been felled”, he dies in the Great Ansei Earthquake.

This blog contains information and musings on current and upcoming Japanese dramas but is not intended to be comprehensive.
View all posts by jadefrost →
This entry was posted in NHK, Spring 2012 Dramas and tagged Hidamari no Ki, Narimiya Hiroki. Bookmark the permalink.