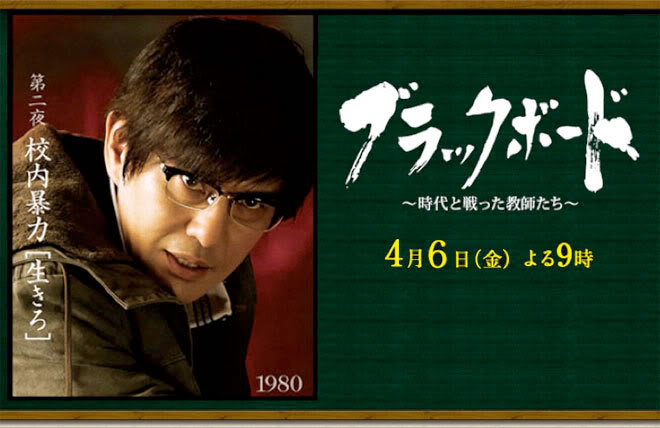 Story
In 1980, Shirahama Shohei’s student, Goto Akira, returns to the junior high school at Ota Ward to be a teacher. His alma mater which brings back fond memories is in the grip of school violence. The thunderous roar of motorbikes of rabble-rousing delinquents, windows smashed by bats, and that classroom blackboard with the words “Go and die” in red graffiti. While the teachers turn their backs on the school’s most problematic student, Furusawa Yukari, Goto stops the violence of the girl who persistently puts her life at risk. That approach draws criticism and he is labelled a teacher who uses physical force. However, he also conveys the importance of life, having experienced it himself.

Characters
Sato Koichi as Goto Akira
A teacher in charge of the science subject. In the past, he had, as a student counselor, taken charge, curbed a fight at a Tokyo school where the greatest violence on campus had occurred, and let the students graduate without incident. Because he quelled school violence on the strength of that ability, he is asked by school principal Nogami Etsuo to transfer from a junior high school in Oshima even though it is mid-term. He is a alumnus of the school and becomes the form teacher of Class 3/5 where Furusawa Yukari, the school’s most problematic student is. However, he is labelled a “teacher who uses physical force” in some quarters. There is also strong opposition from teachers and the Parent-Teacher Association.

Shida Mirai as Furusawa Yukari
The school’s greatest troublemaker who destructs classrooms and disrupts lessons. She is more than the teachers can handle. Although dead set against Goto Akira who has been appointed the new form teacher, she is not only brought into submission by force, but also gradually starts to take an interest in Goto and her classes.

Kanjiya Shihori as Yokote Ryoko
An English langugage teacher and form teacher of Class 3/4. She is totally against corporal punishment and opposes Goto Akira’s directives. However, she sees changes in Furusawa Yukari under his guidance that and starts to believe that Goto truly cares for his students … …

Kimura Tae as Goto Noriko
Goto Akira’s wife. She lived with their son Shinichi for a time during Goto’s absence because he took up a post away from home. She hopes that he will see more of Shinichi because they will finally be living together, but students are everything to her husband as usual. She has little choice but to half-surrender and worry about Shinichi’s future path.

Hayashi Kento as Goto Shinichi
Goto Akira’s only son. He quit club activities while his father was working away from home, and would hide and skip school. Self-conscious about being seen as the son of a teacher who uses physical force and unable adapt to his surroundings, he gloomily goes about daily life.

Maeda Gin as Nogami Etsuo
The school principal. After agonising over the violence in school, he entrusts the students to Goto Akira, who is widely talked of as a “teacher that uses physical force”. Caught between opponents of corporal punishment and real problem students, he spends each day worrying. Even so, his desire to protect the school is no different and he tries to adhere to Goto’s directives, but … …

This blog contains information and musings on current and upcoming Japanese dramas but is not intended to be comprehensive.
View all posts by jadefrost →
This entry was posted in Spring 2012 Drama Specials, TBS/MBS and tagged Blackboard, Hayashi Kento, Kanjiya Shihori, Kimura Tae, Sato Koichi, Shida Mirai. Bookmark the permalink.