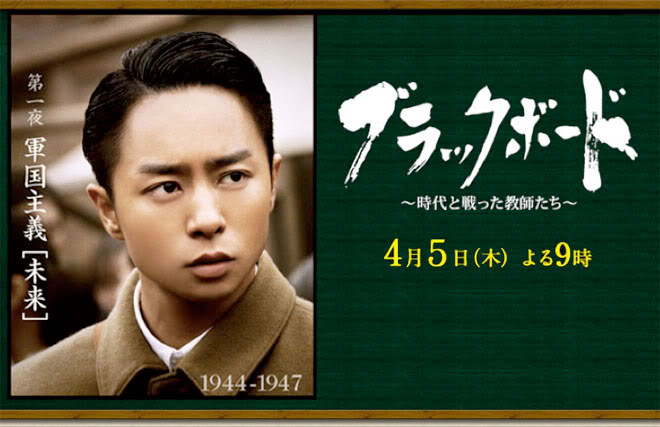 Story
In 1947, Shirahama Shohei, who has returned from the battlefront, teaches again at a junior high school in Ota Ward. He is puzzled by the radical transformation that Japanese education has undergone because of the war defeat, but concerned for the welfare of his former students, he holds a class reunion. Before Shohei departed for the battlefront, he taught that “Japan has no future unless it wins the war” and his students had stared at the word “future” on the blackboard with burning gazes. Believing in that word, they had excitedly volunteered to be child soliders. In the end, they lost healthy bodies and minds, and there were even those who lost their lives. Shohei is tormented by regret and dread. How does he talk about the word “life” on the blackboard?

Characters
Sakurai Sho as Shirahama Shohei
A former teacher in charge of national history who advocated militarism. He believed that war was right and taught students that it is an honour to die for the country before he departed for the battlefront. He lost his right arm and was sent home. Although he goes into teaching again despite his confusion at a Japan that differs little after losing the war, he cannot accept the 180 degree change in educational policy. When he learns of the emotional trauma of the students he had taken charge of and who had believed his teachings, from their present circumstances, he starts to wonder about his beliefs and what education and teachers are, as well as questions himself about the rights and wrongs of war.

Miyazawa Rie as Shirahama Hisako
The wife of Shirahama Shohei’s elder brother. Her husband was killed in action, but she and her son stay with the Shirahama family. She is a modest woman who shows consideration for others. Because she is not good at dealing with people, the night entertainment business is not possible, and she helps her mother-in-law in her sideline. She is the only breadwinner until Shirahama Shohei returns. Even though she is treated as a nuisance of Shohei’s younger sister Shizuko who has also returned to the family home after becoming a widow in the war, she quietly endures for the sake of her son.

Oshima Yuko as Ichihara Takami
An English language teacher at the junior high school. A good-natured, caring and cheerful girl who is concerned about Shirahama Shohei’s bewilderment regarding the change in educational policy. She says that she teaches English, the langauge of former enemy countries because she accepts Japan’s defeat and has moved forward, but her true intention is … …

Nakamura Aoi as Baba Takefumi
A student at Kamata Public School before Shirahama Shohei departed for the battlefront. Completely absorbed in literature under the influence of his father who had been an editor in publishing, he now throws himself into the revolutionary movement. Because of the 180 degree change in education during the war and after the war, teachers and society depress him. Thinking of the friends who had gone to the battlefield in joyful exuberance as the teachers had taught, he cannot hide the anger he feels towards Shohei who is alive and teaching once again.

Kitaoji Kinya as Shioda Akinori
A school principal since the time of Kamata Public School. Believing that education is most important for Japan’s revival, he strongly encourages Shirahama Shohei, who has been repatriated, to return to teaching. He mourns the lost of his son who did not return alive from the war, and aims to teach that Japan never go to war again. The son is the same age as Shohei.

Natori Yuko as Shirahama Masa
Shirahama Shohei’s mother. She is strict with discipline and manners, but loves Shohei deeply. Although she does not show it, she rejoices his return from the battlefield. Her late husband was also a teacher. She senses the internal struggle Shohei feels as he starts teaching again.

This blog contains information and musings on current and upcoming Japanese dramas but is not intended to be comprehensive.
View all posts by jadefrost →
This entry was posted in Spring 2012 Drama Specials, TBS/MBS and tagged Blackboard, Kitaoji Kinya, Miyazawa Rie, Nakamura Aoi, Sakurai Sho. Bookmark the permalink.