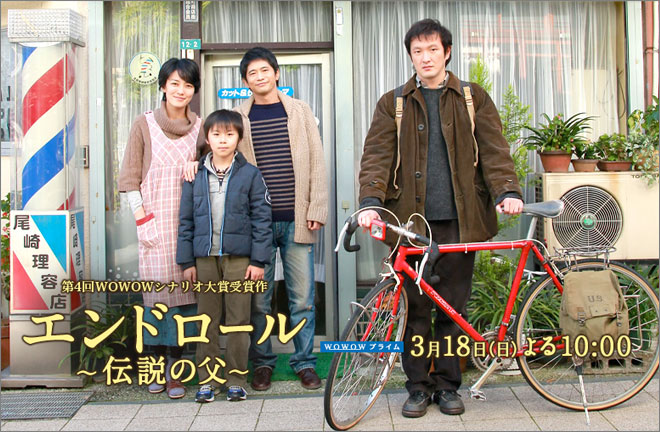 Date: From 10.00 p.m., 18 March 2012
Cast: Nakamura Shidou, Hagiwara Masato, Itaya Yuka, Murakawa Eri, Ikematsu Sosuke, Tajima Reiko, Hotaru Yukijiro, Kajihara Zen, Inagawa Miyoko, Musaka Naomasa
Synopsis: Hashimoto Yuji (Nakamura Shidou), a struggling movie director, receives a letter from Ozaki Akio (Hagiwara Masato), an old friend from high school, and returns home for the first time in 20 years. Hashimoto had gone up to Tokyo after graduating from high school with his sights set on being a movie director, but has not gained much success. He is reunited with Ozaki who has been hospitalised for cancer and asked to make a script that Ozaki had written into a movie. The movie’s title is “The Best Father” and Ozaki himself will be the main character. Hashimoto also meets Ozaki’s wife, Mayumi (Itaya Yuka) again. He is shocked to hear from Mayumi that Ozaki does not have long to live. However, Hashimoto also learns of Ozaki’s wish to bequeath an image of himself for the sake of his son, Kentaro (Ikematsu Sosuke), and decides to shoot the movie.
Website: www.wowow.co.jp/dramaw/endroll

This blog contains information and musings on current and upcoming Japanese dramas but is not intended to be comprehensive.
View all posts by jadefrost →
This entry was posted in Spring 2012 Drama Specials, WOWOW and tagged Endroll, Hagiwara Masato, Ikematsu Sosuke, Itaya Yuka, Nakamura Shidou. Bookmark the permalink.