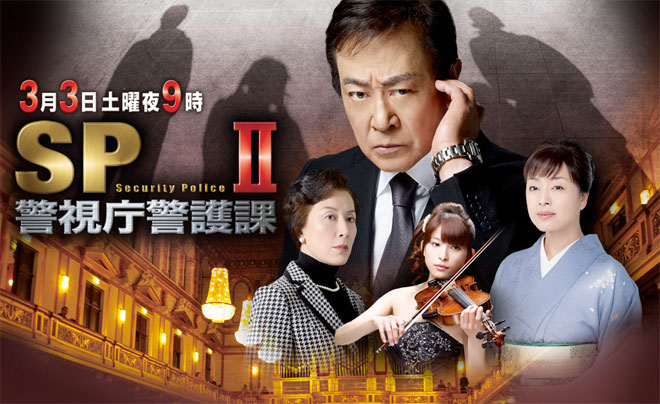 Date: From 9.00 p.m., 3 March 2012
Cast: Watase Tsunehiko, Katase Rio, Uehara Takako, Matoba Koji, Mikura Mana, Enoki Takaaki, Sugimoto Tetta, Takahata Atsuko
Synopsis: Assistant Inspector Takeuchi Koji (Watase Tsunehiko) failed to protect the prime minister as a security police and retired from the front line. One day, he is ordered by a Diet lawmaker Ishinabe Kiriko (Takahata Atsuko) whom he had guarded while cracking a bizarre murder case, to protect a violinist Washio Hanako (Uehara Takako). Hanako took lessons in Europe from a young age, and won awards at numerous international competitions that catapulted her to fame. On this occasion, she has triumphantly returned to Japan for a concert tour around the country. At the same time, Hanako has also been supportive of the democratisation of countries under military dictatorships. It appears that her life is being targetted by a country’s military rulers because of the political statements she reiterates. Hanako is always accompanied by her mother Sayoko (Katase Rino) who works as her manager, and Takeuchi finds himself at the mercy of women once again. In the midst of this, a bomb is planted at a concert venue and eventually Hanako’s step-father Otani (Katagiri Ryuji) who was Sayoko’s ex-husband, is murdered. Is this a warning from that dictatorship to Hanako? The case goes international, but detective Isogai Soichi (Sugimoto Tetta) in charge of Otani’s murder seems to think that the culprit is someone close at hand … …
Website: www.tv-asahi.co.jp/sp

This blog contains information and musings on current and upcoming Japanese dramas but is not intended to be comprehensive.
View all posts by jadefrost →
This entry was posted in TV Asahi, Winter 2012 Drama Specials and tagged SP ~ Keishichou Keigoka Series, Takahata Atsuko, Watase Tsunehiko. Bookmark the permalink.