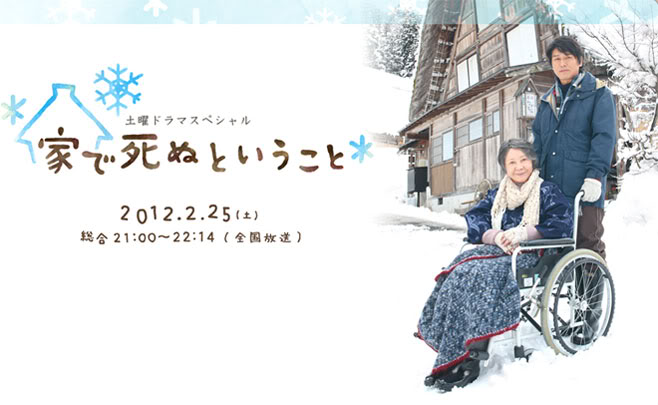 Date: From 9.00 p.m., 25 February 2012
Cast: Takahashi Katsunori, Nishida Naomi, Watanabe Misako, Shonozaki Ken, Yamaguchi Sayaka, Nomura Masumi, Suzuki Yuki, Kunihiro Tomiyuki, Sato Masahiro
Synopsis: Yamazaki Junichi (Takahashi Katsunori) heads to Shirakawa Village in Gifu Prefecture with his eldest son, Ryuta (Shonozaki Ken), in order to persuade his mother-in-law, Hisako (Watanabe Misako), to stay in a hospital in Tokyo. Hisako has been diagnosed with a relapse of cancer and given three months to live. Wishing to die in the comfortable surroundings of her home, she had gone back to Shirakawa Village alone. Junichi is not able to convince Hisako and remains there. His wife, Megumi (Nishida Naomi), who is Hisako’s only child, had used their second son’s university entrance exams and her own work running the sundries store, as excuses not to return to the village. Nishi Hiroshi (Kunihiro Tomiyuki), the director of the village’s special nursing home for the elderly, and the doctor Ito Yuzuki (Yamaguchi Sayaka) proceed to care for Hisako according to the wishes of Hisako and the family. Junichi is told by a neighbour that it is natural to want to die at home, but he worries about the difficulty of her dying alone at home. Then, after witnessing the marriage of the nurse Yukie (Nomura Masumi), a frail Hisako moves into the nursing home but … …
Website: www.nhk.or.jp/nagoya/ie

This blog contains information and musings on current and upcoming Japanese dramas but is not intended to be comprehensive.
View all posts by jadefrost →
This entry was posted in NHK, Winter 2012 Drama Specials and tagged Ie de Shinu to Iu Koto, Nishida Naomi, Takahashi Katsunori, Yamaguchi Sayaka. Bookmark the permalink.