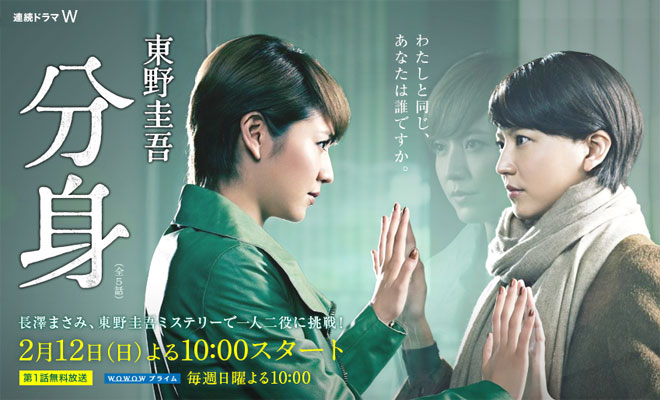 Story
Ujiie Mariko, a university student who lives in Sapporo, has been bothered by her lack of resemblance to her parents since she was a child. She also does not remember being loved very much by her mother, Shizue, who died a suspicious death in a fire at home several years ago. Then one day, Mariko happens to find things that belonged to her mother and learns that Shizue was in Tokyo searching for some kind of secret surrounding her birth while she was alive. Several days later, Mariko’s father, Kiyoshi, who has been living apart from her turns up and abruptly recommends that she study overseas. Sensing that something has begun to happen around her, Mariko sets out for Tokyo to unravel the mystery of her birth. At that moment, Ihara Shunsaku, Hokkaido’s powerful member of the House of Representatives decides to move ahead with a dangerous plan in order to create a successor. Then Mariko learns about a girl named Kobayashi Futaba who lives in Tokyo and has exactly the same face and figure as her. Futaba is more than a twin, she looks exactly like her own self. While Mariko interviews the parties involved in Tokyo, the intentions of various people get in her way. On the other hand, Kobayashi Futaba who is intensely passionate about her band, sees her mother’s adamant refusal to let her make a television appearance and starts to have doubts about her own self. When Mariko and Futaba finally meet, a forbidden medical treatment technique and a dangerous love 20 years ago comes to light.

Characters
Nagasawa Masami as Ujiie Mariko/Kobayashi Futaba
Ujiie Mariko: A university student learning child welfare in Sapporo. The fact that she bears no resemblance to her parents has bothered her since young. Her mother died a suspicious death and something odd that she finds among her mother’s belongings prompts her to start searching for the secret of her own birth.

Kobayashi Futaba: A university student in Tokyo who devotes herself to her band. Her mother, Shiho, has for some reason disliked attracting attention outside ever since she was young, but Futaba dreams of succeeding in the music world.

Katsuji Ryo as Takizawa Yusuke
Kobayashi Futaba’s childhood friend who used to be in the band with Futaba. He gave up his dream along the way to work at his family’s pub. He is always criticised by Futaba. She calls him a person who does things by half measures.

Usuda Asami as Shimojo Megumi
Ujiie Mariko’s good friend since junior high school days. She is studying medicine in Tokyo. Mariko always confided her troubles regarding her family to her. She works to help Mariko, but soon … …

Suzuki Sawa as Ujiie Shizue
Ujiie Mariko’s mother. A housewife. She loved Mariko, but for some reason put a distance between them at some point in time. She died in a fire at home several years ago. It was suspected to be a suicide, but was ruled an accidental death in the end.

Ito Shiro as Ujiie Kiyoshi
Ujiie Mariko’s father. He appears to know something about the secret of Mariko’s birth and the death of her mother but he does not talk about it. He even keeps away from Mariko now, and lives away from the public eye as a pathologist in Hakodate.

Tezuka Satomi as Kobayashi Shiho
Kobayashi Futaba’s mother. A skilled nurse who might have had a relationship with Ihara Shunsaku in the past. She single-handedly brought up Futaba. She extremely dislikes her daughter attracting attention outside and they even argue about it. She will not disclose anything about Futaba’s father.

Ibu Masato as Ihara Shunsaku
A powerful politician. The fixer who exercises control over political circles. He falls sick and is hospitalised.

This blog contains information and musings on current and upcoming Japanese dramas but is not intended to be comprehensive.
View all posts by jadefrost →
This entry was posted in Winter 2012 Dramas, WOWOW and tagged Bunshin, Ibu Masato, Nagasawa Masami, Sano Shiro, Usuda Asami. Bookmark the permalink.