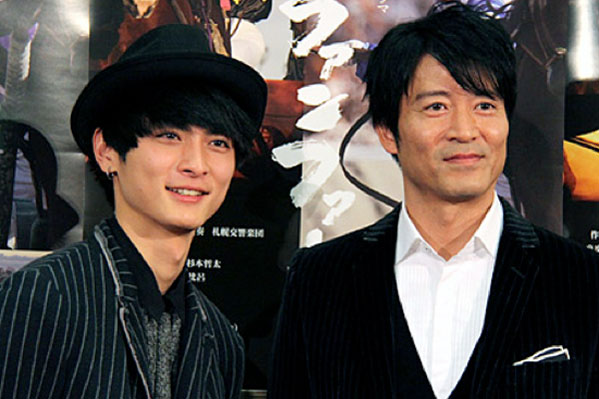 Don’t these two men look SO good? Actors Kora Kengo and Terawaki Yasufumi have recently been doing the rounds to promote NHK Sapporo’s two-part drama Daichi no Fanfare which airs later this month. Filmed in Obihiro City, Hokkaido, the drama is set in the world of draft horse racing, a sport known in Japanese as ‘banei keiba’ which is unique to Hokkaido. In draft horse racing, big horses weighing close to a ton race by dragging iron sleds through a 200 m course which has two humps.

Kora, who is headlining a drama for the first time in his career, plays a rookie rider, Kitamura Shunpei, who was a school dropout. Shunpei has not had a single victory even though it has been more than two and a half months since his debut, and he gets even more impatient for success when he finds himself trailing behind his peers. He considers quitting riding, but the encouragement of a top rider, Kurahashi Yuji, played by Terawaki, makes him resolve to live as a rider once again.

Kora does not keep pets, but he became one with the horses in a short time. “I’m supposed to be the top jockey, but I’m actually the most bumbling. It was Kora-kun who steadily improved,” Terawaki smiles wryly. “I thought it would be easy just being on the sled, but it wasn’t,” he emphasises the depth and difficulty of draft horse riding.

Kora who had race and animal training scenes says, “It was an experience I wouldn’t ordinarily have had if not for this production. The horse would listen to what I say when I’m in a good state of mind, and would not when I’m not. I recognised the instant when I connected with the horse.” His eyes gleam and he smiles. “Nearing the end of the shoot, it was the last time for me to ride, and the horse knew it too. On the way back, it maintained eye contact with me all the way until I could no longer be seen even though it would usually avert its face.”

This blog contains information and musings on current and upcoming Japanese dramas but is not intended to be comprehensive.
View all posts by jadefrost →
This entry was posted in NHK, Winter 2012 Drama Specials and tagged Daichi no Fanfare, Kora Kengo, Terawaki Yasufumi. Bookmark the permalink.