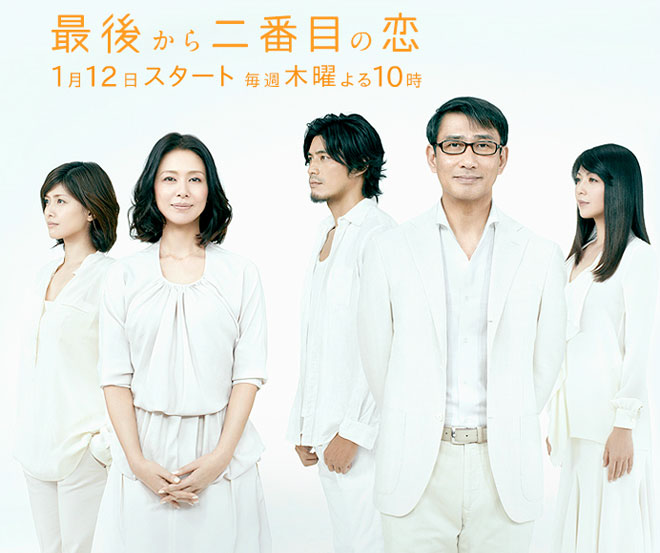 Story
Yoshino Chiaki is a 45-year-old single woman who works as a drama producer at JMT TV. She worked hard to churn out a number of dramas, and in her personal life, has been in love more than others. However, she had recently been warned by her boss that he does not expect her to be on set forever. It appears that the drama she is creating this time, will be her final production. She has not been in love for a long time and right now her subjects her female friends are entirely on health and old age. 50-year-old Nagakura Wahei is the head of the at Kamakura City Municipal Office’s Tourism Promotion Division. Because his parents died early, he acted as a surrogate parent to his four brothers and sisters. He now lives with his younger siblings, Shinpei and Mariko, as well as his 11-year-old daughter, Erina, who was born to him and his late wife. Chiaki is ordered to team up with the popular and beautiful scriptwriter Kuriyama Haruka to create a drama series. However, the script that Haruka has written not only fails to meet the deadline but is also completely boring. While judging Haruka’s work harshly, Chiaki is stricken with giddiness and nausea – the symptoms of menopause – and taken to the hospital. Her single friends of the same age, Araki Keiko and Mizuno Shoko, reward her upon her discharge. Chiaki, who keenly felt the absence of family on the night she was hospitalised, proposes to act on the idea of living together in a traditional folk house in Kamakura that she had half jokingly said to them some time ago. One day, Chiaki visits Kamakura with the information she had checked beforehand. She enjoys the walk to the traditional folk house that is up for sale and learns that the house next to this is a retrofitted cafe. It is ‘Nagakura’, the cafe where Shinpei is the manager. At that moment, Wahei is dealing with a persistent complainer called Ichijo. This time his complaint is that there is a woman who had peeped into other people’s home and taken photographs. Wahei makes a standing signboard to appeal to people to refrain from taking photographs and visits the Ichijo residence. Ichijo shows him photographic evidence that he had taken with his mobile phone’s camera. Chiaki’s heart palpitates in the presence of the eloquent and free-spirited Shinpei. After she leaves ‘Nagakura’, she drops by the beach which is where she encounters Wahei, who is there cleaning it with his subordinates. But … …

Characters
Koizumi Kyoko as Yoshino Chiaki
A drama producer with the television station, JMT. 45 years old and single. She is at an age where she feels insecure about her future and her conversations with friends are solely on health and old age … … rather than romantic love. The future painted of balancing work and family at the time she joined her company, is completely different from the present life she leads. Thinking that something may change if she can spend time at a leisurely pace, she gets the idea of renting and living in a traditional folk house with her friends in their old age, and casually sets out to Kamakura to take a look.

Nakai Kiichi as Nagakura Wahei
A widower with a 11-year-old daughter. The older brother of four siblings, he assumed the role of surrogate parent because their parents died early. He works at the Tourist Promotion Division of Kamakura City’s municipal office. At 50, he is at a turning point in his life where he feels himself getting noticeably out of shape these days. He is almost done with raising his daughter, but thinks it would be a bother to be in love with someone after all these years … …

Sakaguchi Kenji as Nagakura Shinpei
Nagakura Wahei’s handsome younger brother. 35 years old and single, he is free-spirited, but somewhat unfortunate. He is the manager of ‘Nagakura’, a cafe which was opened after the first floor of the Nagakura residence was converted. He has never dated any particular woman, but seriously wishes that the women in this world would be happier, and thinks that he would do anything if the smiles he gives would soothe a person’s heart.

Uchida Yuki as Nagakura Mariko
Nagakura Shinpei’s elder fraternal twin. 35 years old and single. She is a sensitive soul who gets deeply hurt by people’s offhand remarks. After graduating from high school, she attended college but could not adapt well and dropped out. After that, she kept switching jobs and is now a part-time worker. She is grateful to Wahei and thinks she could be dutiful to her older brother one day.

Iijima Naoko as Mizutani Noriko
The eldest daughter of the Nagakura family. A 45-year-old nagging housewife. After graduating from high school, she immediately married Mizutani Hiroyuki, the physical education teacher in charge of her class, and became the mother of a boy, Sho. Things were good while her child was young, but right now her husband is completely wizen and her son only sees her as a cook or housekeeper. Unhappy with the situation, she hangs around her family home, which is in the neighbourhood, almost every day.

This blog contains information and musings on current and upcoming Japanese dramas but is not intended to be comprehensive.
View all posts by jadefrost →
This entry was posted in Fuji TV, Winter 2012 Dramas and tagged Koizumi Kyoko, Nakai Kiichi, Saigo kara Nibanme no Koi Series, Sakaguchi Kenji, Uchida Yuki. Bookmark the permalink.