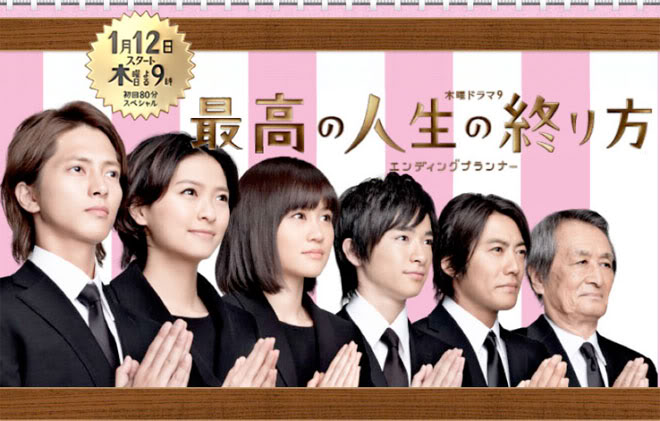 Story
Ihara Masato is the second son of ‘Iharaya’, the funeral parlour in Tokyo’s old town. His family is made up of his father and four siblings. His mother passed away when he was a third year student in junior high school. ‘Iharaya’ is also a purveyor of the police and his father Kotaro is the third generation owner. However, Masato hates the family business because he bitterly remembers being mocked as the “funeral parlour boy” by the people around him when during his childhood. Because of this, he assumes that Kento, his older brother born of a different mother, would take over the funeral parlour and quickly leaves home. He joins a big chain of Japanese-style pubs after graduating from university and is now an area manager in charge of managing the performance of the pubs in his area. It is a tough job where he has to push his employees in order to achieve the demanding quote assigned by the head office. One day, Masato sternly reprimands a pub manager for not meeting the sales quota. But the next day, that manager jumps off a building and ends up in a coma. Masato is saddened that the manager had attempted suicide because of the scolding. At that moment, he receives a phone call from his younger sister Haruka who has been helping out in the family’s funeral parlour business. Their father has collapsed. She also discloses that their older brother whom they thought would take over as the fourth generation owner, had suddenly left home two months ago and gone missing. Masato is taken aback. His younger siblings, Hayato and Momoko, rush to the hospital too. Their father regains consciouness for a brief moment. He tells them to close the funeral parlour and then draws his last breath … … Masato stands in as the chief mourner in his brother’s absence, but holds the funeral without feeling sorrow for his estranged father. Several days later, he returns to work and visits the hospital where the unconscious manager was hospitalised. However, the man has died. Masato would never have had the intention of succeeding his father, yet in front of the man’s surviving family members, he decides that ‘Iharaya’ will undertake the funeral service. With the help of Haruka and Tanaka, who has worked at ‘Iharaya’ for years, Masato holds the funeral. Bothered by the words of the family members who wonder why the manager had committed suicide, Masato goes to the police precinct to enquire about the circumstances surrounding the man’s plunge. While there, he meets the female police officer Sakamaki Yuki whom he got to know at a previous matchmaking party … …

Cast
Yamashita Tomohisa as Ihara Masato
The second son of the Ihara family. He is usually aloof about worldly trivialities and hides his real feelings from people, but is in fact a passionate person who will persist once he decides on something. His mother passed away when he was a third year student in junior high school. During his childhood, he was mocked as the “funeral parlour boy” by the people around him and Masato hated the family business for years. Because of that, he joins a major chain of Japanese-style pubs after graduating from university. Thinking that his older brother Kento would inherit the funeral parlour, he has kept a distance from his family home because he now earns his own living and left home early. He currently works as an area manager for the chain of pubs. Then his father, Kotaro, who has been running the funeral parlour suddenly dies and Masato undertakes the funeral for one of his pub managers of his own free will, but … …

Takashi Sorimachi as Ihara Kento
The eldest son of the Ihara family and the fourth generation owner of ‘Iharaya’. The only child born between Ihara Kotaro and his first wife. Masato and his other three siblings are children born to Kotaro and his second wife after Kento’s mother passed away. A popular person who has a reputation in the neighbourhood as frank and generous. He also gets a little carried away easily. But aware that he is the eldest son, he worked at ‘Iharaya’ after graduating from high school with the intention of inheriting the family’s funeral parlour business. However, he suddenly left home one month ago and his whereabouts is not known … …

Maeda Atsuko as Ihara Haruka
The eldest daughter of the Ihara family. She is qualified at bookkeeping and worked in the family busines after graduating from college. She became her father’s right-hand man as the person in charge of Iharaya’s accounting. She is the only person among her siblings who can speak their father’s thoughts as well as cajole him. She is also strong-minded and big-hearted. Her right leg was crippled in an accident when she was young. She and Masato are often at odds over Iharaya’s business policy. Because of that, she is initially opposed to Sakamaki Yuki, who gets involved in ‘Iharaya’ under the guise of assisting Masato, but gradually comes to understand her well.

Eikura Nana as Sakamaki Yuki
A female police officer at the local police precinct where Ihara Masato’s family home is. An only child whose parents took good care of her. She has a strong sense of justice and is earnest. She became a police officer because of the influence of her beloved grandfather, a former detective. He lives nearby and although he is eccentric, she loves him for understanding her. She is initially assigned to her desired Criminal Affairs Division and her heart swells to be the darling of the police. However, the reality is odd jobs and failure everyday. In the midst of this, she is reunited with Masato, who had been her partner at a matchmaking party, inside the police precinct. At first, the two of them would quarrel whenever they are face-to-face. But before they realise it, they are working together and handling the funeral services of “imperfect” dead bodies admirably. She is a rare person who is able to get the aloof Masato who does not show his weaknesses, to say what is on his mind. Masato gets her irritated, but before long, she is moved by him … …

Yamazaki Tsutomu as Iwata Itsuro
A friend of Ihara Masato’s father, Kotaro. After Kotaro’s death, he keeps appearing before Masato saying that he is a friend. Despite their difference in age, he and Masato somehow get along, and before long, a friendship develops. Like Kotaro, he is a cantankerous person with one or two idiosyncracies, but tolerant enough to casually help although he says nasty things. He instructs Masato and has him take care of the bonsai that Kotaro has left behind. He is knowledgeable about plants.

This blog contains information and musings on current and upcoming Japanese dramas but is not intended to be comprehensive.
View all posts by jadefrost →
This entry was posted in TBS/MBS, Winter 2012 Dramas and tagged Eikura Nana, Saikou no Jinsei no Owarikata. Bookmark the permalink.

3 Responses to Saikou no Jinsei no Owarikata ~ Ending Planner