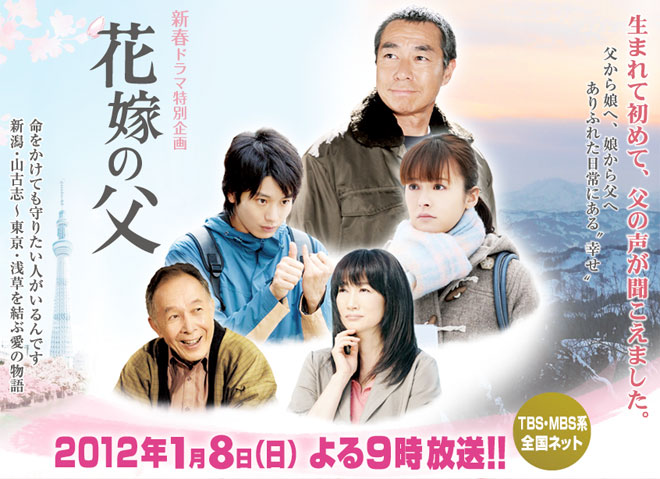 Date: From 9.00 p.m., 8 January 2012
Cast: Yanagiba Toshiro, Mukai Osamu, Kanjiya Shihori, Yo Kimiko, Cho Tamiyasu, Takahashi Kaori, Matsukane Yoneko, Hashizume Isao
Synopsis: Hoshino Satoshi (Yanagiba Toshiro), who lives in Yamakoshi in Niigata Prefecture, gave up his pursuit of a career in graphic novels when he was young, and now raises the legendary bulls which take part in Yamakoshi’s traditional bullfighting tournament. His wife Yuriko (Takahashi Kaori) died young because of an illness, and he now lives with his father Koichiro (Hashizume Isao) and daughter Mion (Kanjiya Shihori). Satoshi and the deaf-mute Mion have a strong bond, but there is an offer of marriage for her from a local young man called Kosugi Ichita (Cho Tamiyasu). On the other hand, Satoshi has a one-sided love for a woman called Sakamaki Yukiko (Yo Kimiko) who lives nearby. Yukiko’s presence is a relief to Satoshi who can candidly talk about the mixed emotions he has for his daughter, but he cannot figure out Mion’s feelings for them. In the midst of this tangle of feelings, the talk of marriage between Mion and Ichita breaks down. A hurt Mion takes a trip to Tokyo to find comfort. While there, she meets Tanaka Maru (Mukai Osamu), a young man who is a boatman and heir of a long established Asakusa boathouse … …
Website: www.mbs.jp/hanayome

This blog contains information and musings on current and upcoming Japanese dramas but is not intended to be comprehensive.
View all posts by jadefrost →
This entry was posted in TBS/MBS, Winter 2012 Drama Specials and tagged Hanayome no Chichi, Hashizume Isao, Kanjiya Shihori, Mukai Osamu, Yo Kimiko. Bookmark the permalink.