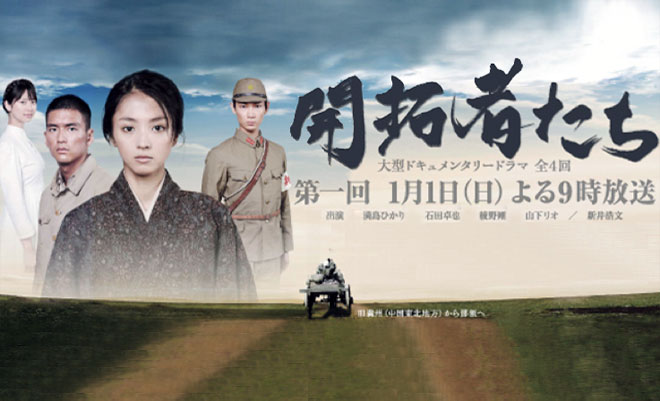 Story
Abe Hatsu, who grew up in a poor village in Miyagi prefecture, is recommended to be a mainland bride in order to reduce the mouths to feed. In 1936, she goes to Qianzhen (known as Chiburi to the Japanese) in Manchuria (northeastern China) with Konno Umeko, Kidoura Chie and other girls from Miyagi prefecture, and marries Asano Hayao. There are sporadic attacks by Chinese bandits unhappy with the Japanese for occupying land in the frontier area. However, the idea of the leaders So Mitsuhiko and Yoshizaki Chiaki is for harmony with the Chinese. Nurtured by the love of her uncouth but caring husband, Hatsu gets used to life in the frontier and lives peacefully. She gives birth to two daughters, Yoko and Keiko, and also passes the test to be a midwife. Before long, Hatsu sends for her brothers, Kinji and Shiro, as well as younger sister Tomie. Shiro, the crybaby who is always bullied, forges a friendship with Haruki, the son of a Chinese man who saved him. Through his encounter with horses, he finds his purpose in life in livestock and under the guidance of Hayasaka Gohei, an elderly man in the group, matures into a sturdy young man. Tomie sets her sights on becoming a nurse and heads for hospital in Beian. Meanwhile, Kinji volunteers for the army in order to protect the people of the frontier area, and is assigned to the military police. However, he is ordered to torture the Chinese that have been captured … … Their peacefully life is suddenly changed by a deterioration in the war situation. Hatsu’s husband, Hayao, and others are called together and sent to the Soviet border. Then on 9 August 1945, the Soviet army invades. Hatsu and Shiro attempt to flee by train, but the last train leaves before their very eyes.

This blog contains information and musings on current and upcoming Japanese dramas but is not intended to be comprehensive.
View all posts by jadefrost →
This entry was posted in NHK, Winter 2012 Dramas and tagged Ashina Sei, Ayano Go, Emoto Akira, Hira Takehiro, Kaitakushatachi, Mitsushima Hikari, Satsukawa Aimi. Bookmark the permalink.