Chocho-san ~ Saigo no Bushi no Musume 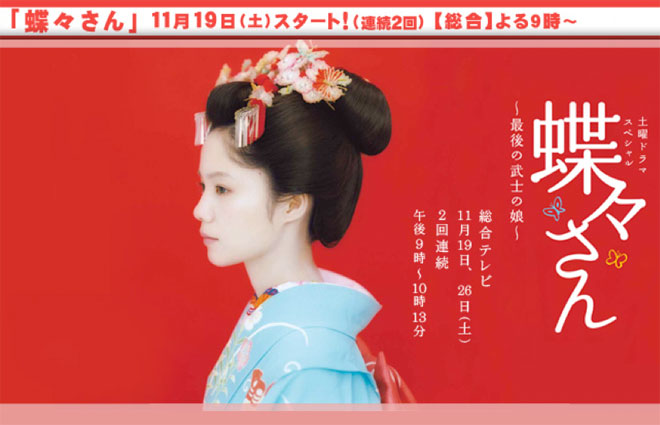 Story
At the beginning of the Meiji era, Chocho’s father, who belonged to a family formerly of the samurai class in Saga domain, got mixed up in the Saga Rebellion and died. Chocho’s grandmother, Miwa, and mother, Yae, gave her a passion for knowledge which would enable her to establish herself in the new world, and taught her the spirit of a samurai’s daughter. However, both of them suddenly died of cholera. Chocho was adopted into ‘Suigetsuro’, the best brothel in Maruyama in Nagasaki City. She is reunited with her childhood friends, Tanigawa Isaku and Yuri. However, with the sudden death of her adoptive mother, Matsu, who had promised to let her continue on to a girls school where she can learn English, Chocho goes from daughter and heir to servant. Obitani Soshichi, a man in the shipping business, rescues Chocho. She starts training as an apprentice geisha under the tutelage of Sachi, the female proprietress of ‘Sueishi’, a well-established geisha house. Meanwhile, an American naval warship carrying Second Lieutenant Franklin heads for Nagasaki. Chocho meets Franklin at a party at the consulate, and both are drawn to each other. She feels that he has the spirit of a samurai within him and decides to get married, but … …

Characters
Miyazaki Aoi as Ito Cho (Chocho)
The daughter of a samurai family. She became an apprentice geisha after her family died. She dreams of going to America and marries Franklin, an American naval officer.

Ito Atsushi/Noda Hideki as Tanigawa Isaku (Meiji era)/(Showa era)
An employee of Obitani Shipping. He is Chocho’s childhood friend and continues to be in love with her when they are reunited. After that, he achieves success in the shipping industry in Nagasaki. In 1936, he meets Joe, an American businessman, at the performance of the opera ‘Mrs Chocho’ at the theatre, Kabukiza.

Nishida Toshiyuki as Obitani Soshichi
The president of Obitani Shipping. He supports Chocho from behind the scenes.

Ethan Landry as Franklin
An American naval officer. He falls in love with Chocho at first sight and makes her his wife. However, he is soon ordered to return to America.

Ikewaki Chizuru as Tanigawa Yuri
Chocho’s good friend and the younger sister of Tanigawa Isaku. She moves to the America of her dreams, but tragedy visits her.

Toda Keiko as Ota Matsu
The female boss of ‘Suigetsuro’ in Nagasaki. She schools Chocho in anticipation of her becoming her successor.

Fujimura Shiho as Ito Miwa
Chocho’s grandmother. She passes on the spirit and etiquette of a samurai family to Chocho. She is strict yet kind.

Okunuki Kaoru as Ito Yae
Chocho’s mother. She advocates the life of females of the new generation and gives Chocho a dream.

Iwamatsu Ryo as Ota Kisaburo
The owner of ‘Suigetsuro’. He seems to be a carefree pleasure seeker, but is in fact plotting a horrendous scheme.

Honda Hirotaro as Obayashi Genkuro
Chocho’s uncle. He sold Chocho to ‘Suigetsuro’ but calls it the adoption of a child.

Yo Kimiko as Osachi
The female proprietress of the geisha house ‘Sueishi’. She accepts Chocho from ‘Suigetsuro’ and trains her to be an apprentice geisha.

This blog contains information and musings on current and upcoming Japanese dramas but is not intended to be comprehensive.
View all posts by jadefrost →
This entry was posted in Fall 2011 Dramas, NHK and tagged Chocho-san, Ikewaki Chizuru, Miyazaki Aoi, Nishida Toshiyuki, Okunuki Kaoru, Toda Keiko, Yo Kimiko. Bookmark the permalink.

1 Response to Chocho-san ~ Saigo no Bushi no Musume