Shimei to Tamashi no Limit 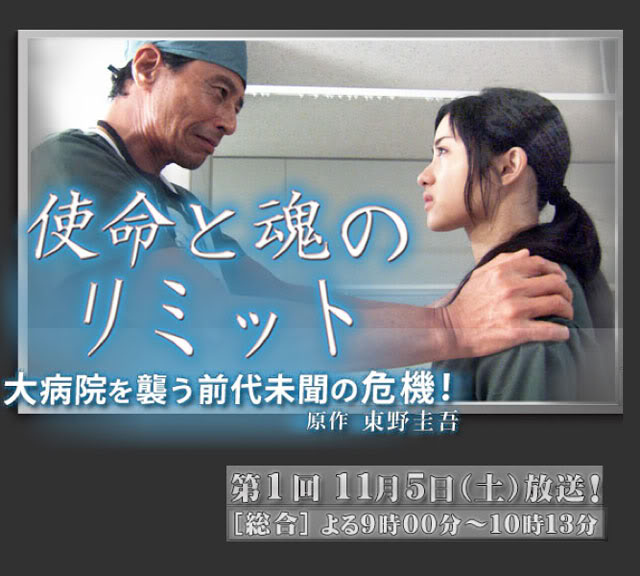 Story
Himuro Yuki is troubled that the man whom her mother wishes to remarry is the surgeon who had performed the operation which her father had died in. Yuki, who has become a houseman at the cardiovascular department of the hospital where that man, Professor Nishizono Yohei, works, recalls the word “mission” as she gets swamped being a surgical assistant and caring for patients in ICU. It was a word that her father had frequently talked about. A man gets into the hospital’s wards with the assistance of the nurse, Manase Nozomi and secretly examines its medical equipment. He is an engineer called Naoi Joji who keeps his objectives to himself. “If medical malpractice is made public, the hospital will be destroyed”. One day, Yuki discovers such a written threat. Is there a link between her father’s death and the medical malpractice mentioned in the letter? Flares laid by a criminal causes panic to break out at the hospital. Patients are transferred to other hospitals one after another. But one patient, Shimabara Soichiro, the president of Kurama Motors has a strong desire to have his surgery performed by the famous and highly respected Nishizono, and does not intend to go anywhere. Yuki is ordered by Nishizono to join Shimabara’s surgery. Then Yuki learns that her father had caused the death of Nishizono’s son in an accident when he chased him in a patrol car. Was there enmity between Nishizono and her father?

Characters
Ishihara Satomi as Himuro Yuki
A houseman who works at Teito University Hospital’s Cardiovascular Department. Her father lost his life in a surgery while she was in her teens. She works under Professor Nishizono Yohei, who had been the operating surgeon at that time, and still cannot shake off her misgivings.

Hayami Mokomichi as Naoi Joji
A young man who works as an engineer. Some past incident leads him to secretly polish the elaborate crime he is plotting against Teito University Hospital.

Fukikoshi Mitsuru as Nanao Yukimasa
A detective with the Tokyo Metropolitan Police’s First Investigative Division. He pursues the truth behind Teito University Hospital’s intimidation case with enthusiasm. There are times when he incurs the displeasure of those around him because of his unconventionl working style.

Kurashina Kana as Manase Nozomi
A nurse who works at Teito University Hospital. She believes the false affections of Naoi Joji is true love and does not doubt him. As a result, she ends up helping him in his crime.

Tachi Hiroshi as Nishizono Yohei
A highly skilled doctor who works at Teito University Hospital’s Cardiovascular Department. His feelings for medical care are sincere and he faces mixed emotions from Himuro Yuki, but he maintains a dignified stance in his field.

Takashima Reiko as Himuro Yurie
Himuro Yuki’s mother. An intimate relationship emerges between her and Nishizono Yohei following the death of her husband, Kensuke, and she considers marrying him. This causes her relationship with Yuki to become sensitive … …

Nagashima Toshiyuki as Himuro Kensuke
Himuro Yuki’s late father. He had been a police officer. He once told Yuki that he hoped she would find a job that she can call her mission, and those words still echo in her mind.

This blog contains information and musings on current and upcoming Japanese dramas but is not intended to be comprehensive.
View all posts by jadefrost →
This entry was posted in Fall 2011 Dramas, NHK and tagged Fukikoshi Mitsuru, Hayami Mokomichi, Ishihara Satomi, Kurashina Kana, Shimei to Tamashi no Limit, Tachi Hiroshi, Takashima Reiko. Bookmark the permalink.