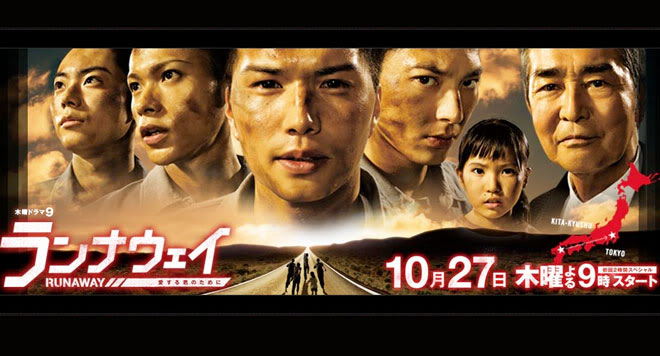 Story
An incident causes Katsuragi Ataru to be wrongly accused of murder and put behind bars in a Kita Kyushu prison. He hears from his girlfriend, Sasaoka Yuki, that their daughter, Chiharu, has a serious heart condition and decides to break out of prison. Through an unexpected turn of events Kawashima Ryunosuke, Takimoto Kuya and Kagami Shun join in his plan. Their reasons and circumstances may be different, but they are all innocent. The four of them have reasons why they cannot wait until their respective dates of release, and because of that, they have to get out of these prison cells as soon as they can. They benefit from the ingenuity of Yamada Katsuji who shares a cell with Katsuragi and succeed in escaping from prison. While they are on the run from from the pursuit of detectives from the Fukuoka Prefectural Police, they meet a girl called Sakura, who is being abused by her parent(s), in a house that they take refuge in. Former detective Yanagawa Kotaro who had been in charge of a case five years ago, starts to reinvestigate Katsuragi’s case and initiate contact with the parties involved … … They begin the 1,000 km journey from Kita Kyushu to Tokyo to accomplish their respective objectives … …

Characters
Ichihara Hayato as Katsuragi Ataru
The leader of the prisonbreakers. A straightforward and passionate guy who would press on and never give up even though he is embroiled in trouble. He is a childhood friend of Sasaoka Yuki, his girlfriend, and Inui Toshio. It was Yuki’s devotion that had supported Katsuragi whose parents have died. He becames a cook and just as he was about to build a happy family with a pregnant Yuki, he got involved in that case and was imprisoned. He learns that Chiharu, his daughter with Yuki, has a heart ailment while serving time … …

Tsukamoto Takashi as Kawashima Ryunosuke
The troublemaker among the prisonbreakers. He compulsively rushes headlong into his ambitions and clashes with Katsuragi Ataru over every little thing. Although he appears to be selfish and reckless, he actually has a stronger sense of duty and compassion than others, and conceals his kindness. When he passed the age of 20, he became a junior member of a crime syndicate and devoted himself to his leader, Hasuike. However, one day, he made the acquaintance of Misaki, a blind girl, and talked to Hasuike about leaving the group. The condition was that he be imprisoned. He opposes Katsuragi but regains his trust in his buddies. Then he learns that his beloved Misaki is marrying someone else … …

Ueda Tatsuya as Takimoto Kuya
A frivolous and good-natured former host. His inability to read between the lines is his shortcoming. He meddles with Katsuragi and the others, but means no harm. A modern guy into digital gadgets, he tweets with his handphone while they are on the run. He hardly went to school, lived an irresponsible life, and became a host.

Suda Masaki as Kagami Shun
The only one among the prisonbreakers who was raised in the lap of luxury. A cool and intellectual person. Three months ago, he had been working part-time transporting “mysterious loot” only for a shadowy man.

Fukuda Saki as Sasaoka Yuki
Katsuragi Ataru’s girlfriend. A childhood friends with Katsuragi and Inui Toshio since elementary school. From the time she was a child, she has been loved by regular customers from the neighbourhood as the poster girl of the restaurant that her parents run. She works with her parents even now as she and Chiharu wait impatiently for Katsuragi’s return.

Watari Tetsuya as Yanagawa Kotaro
A former detective who had been in charge of a case that involved Katsuragi Ataru five years ago. He is now a clerk at a car parking facility. He made a name for himself during his career as a detective. However, he gave priority to his work and was not even present at his wife’s funeral service when she passed away. As a result, his only daughter hates him to this day. His intuition leads him to question the theory that Katsuragi was a criminal in the case five years ago based on Katsuragi’s testimony and character. When Katsuragi breaks out of prison, he begins to wonder if that case has a hidden truth and starts to conduct his own investigation.

Ryu Raita as Yamada Katsuji
A man sentenced to life imprisonment for murder and robbery. He is in the same cell as Katsuragi Ataru. He teaches an amateurish Katsuragi the way to make furniture in prison. He stares at the photograph of his daughter everyday and knowing that he will be behind bars for a long time, he decides to break out of prison with Katsuragi and the others in order to see her one more time.

Chiba Yudai as Inui Toshio
A childhood friend of Katsuragi Ataru and Sasaoka Yuki. Calm and gentle in temperament, he has been good friends with Katsuragi since childhood even though they are rivals. He now works as a civil servant. Katsuragi’s prisonbreak leads him to appear before Yuki for the first time in five years, but … …

This blog contains information and musings on current and upcoming Japanese dramas but is not intended to be comprehensive.
View all posts by jadefrost →
This entry was posted in Fall 2011 Dramas, TBS/MBS and tagged Chiba Yudai, Fukuda Saki, Runaway, Ryu Raita, Suda Masaki, Watari Tetsuya. Bookmark the permalink.