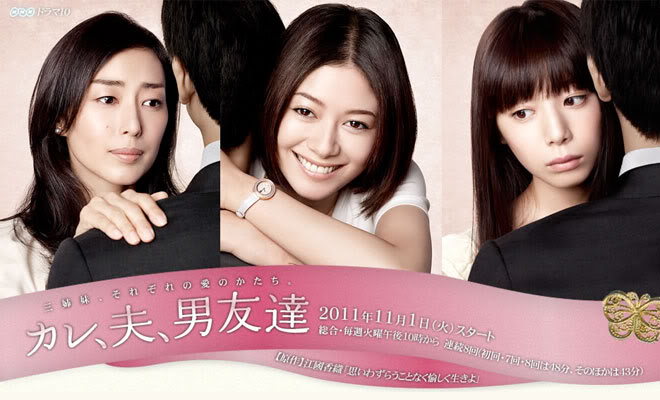 Story
Haruko, the Inuyama family’s second daughter, sends off her boyfriend, Kumaki Keisuke, who is going to the Middle East. As her loneliness grows, she crosses paths with her ex-boyfriend. The eldest daughter, Asako, is not able to confide in her family that she is stuck in a overly dependent relationship with her husband, Kuniichi. The third daughter, Ikuko, is troubled by her inability to understand this feeling called love. An exhibition of the flower arrangement of the girls’ mother, Yoko, is held, and the family gathers for the first time in years. They are also joined by their father, Shuji, who divorced their mother and left home. Ikuko cannot tolerate his gentle treatment of Yoko. At that moment, Kumaki, returns to Japan after being away for three months. Haruko rushes into his arms.

Characters
Maki Yoko as Inuyama Haruko
The Inuyama’s second daughter who is a top event planner. Everything is about being her natural self and her credo is to never look back, but she gets out of control at times. She lives together with Kumaki Keisuke, a freelance cameraman, but feels that marriage is a shackle even though they love each other. When she turns down his proposal, their relationship grows awkward. After that, she scrambles about for the sake of her troubled sisters even as she gets into crises in her love life and work.

Kimura Tae as Tada Asako
The Inuyama’s eldest daughter. She married Tada Kuniichi whom she had met five years ago when she was a librarian at a library. She lives in a fancy home in Setagaya ward and is admired by neighbours as a lovely wife. However, the form of marital love is too peculiar that she herself does not know if it is love or if it is starvation.

Kaho as Inuyama Ikuko
The Inuyama’s third daughter who does biology research at graduate school. She has never truly liked a man before, and has been staying clear of romance in life. During her adolescence, her beloved father had broken up their family for love, and that has profoundly affected her outlook on life. She cannot understand love, and there are times when she thinks it is a waste of emotions.

Santamaria Yusuke as Tada Kuniichi
Tada Asako’s husband. A perfect elite who works for a leading bank. He loves Asako too much and cannot live without her. Because he is, in fact, a weak man who does not know how to love, he becomes physically abusive and Asako gets entangled in it.

Tokui Yoshimi as Kumaki Keisuke
A cameraman whose profession also takes him to battlefields. He is cohabiting with Inuyama Haruko. When he is at home, he cooks, heats the bath and cheerfully waits for her return. Although he complains about Haruko’s excessively free-spirited nature, he is not able to leave her.

Takahata Atsuko as Inuyama Yoko
The mother of the three Inuyama sisters. She is now friends with her ex-husband, Kusakabe Shuji, who divorced her. She would ignore criticism from her daughters when she pampered her husband. Although she is open, she is a woman with innumerable hidden parts. She is active in flower arrangement and is successful in her craft.

Nagatsuka Kyozo as Kusakabe Shuji
The father of the three Inuyama sisters. A university professor. Five years ago, he had divorced Yoko, his wife of many years, and married Masami, an academic staff. It’s not that he was unhappy with his wife. It was a decision driven by a desire to try to live a completely new life with his new wife.

This blog contains information and musings on current and upcoming Japanese dramas but is not intended to be comprehensive.
View all posts by jadefrost →
This entry was posted in Fall 2011 Dramas, NHK and tagged Kaho, Kare Otto Otoko Tomodachi, Kimura Tae, Maki Yoko, Nagatsuka Kyozo, Santamaria Yusuke. Bookmark the permalink.