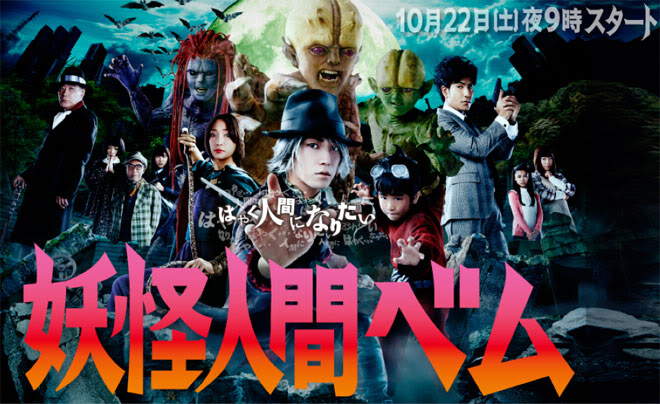 Story
Bem, Bella and Bello who seem to be a family, are in fact monsters who cannot become human. They usually disguise themselves and behave as human beings, but return to their ugly monster forms when they get angry or sad. However, no matter how much they are feared and despised by humans, Bem cannot bring himself to ignore people in trouble. The three of them have helped humans countless times in the past and continued to live in hiding and on the run for hundreds of years. “Humans only think about themselves. Humans cannot be trusted.” Even so, Bem, Bella and Bello wish to become human as soon as possible. Their only clue to become human beings is an old newspaper photograph of a man holding a white walking stick. One night, the trio find a man called Okada hung upside down from the top of a building. Bem saves him in the nick of time, but is discovered by the detective Natsume Akinori, who has come to the rescue, and is questioned about the incident. After that the man who hung Okada from the building commits suicide. The case appears to be solved, but Natsume is discomfited by Bem’s appearance and tries to check his background. One day, Bello saves 12-year-old Yui who was being bullied in the park. The two of them become fast friends, and it turns out that Yui is Natsume’s daughter. Bem, Bella and Bello are invited to the Natsume household for dinner as a result of this. Bem happens to see a family photograph that shows the same man with the white walking stick! This man is a biologist called Professor Ogata. Bem, Bella and Bello visit him, but he says he does not know anything. This disappoints them. At that moment, there is a rapid development in the case that Natsume has been pursuing. Okada, who had been under police protection, disappears. Detective Hatakeyama, Natsume’s senior, also vanishes. An unexpected connection between them and the man who committed suicide is revealed, and Natsume finds himself in a tight spot … …

Characters
Kamenashi Kazuya as Bem
He wishes to become a human and has wandered the streets with Bella and Bello in search of the method for a long time. A man with sad and melancholic thoughts because he has been stymied by humans. Although he does not trust human beings, he is filled with a sense of justice and feels compelled to help people in need.

Anne as Bella
A monster who is the type that cannot help speaking her mind. Because of this extreme personality, strong sense of justice as well as her feelings for her comrades, she is also excessive when punishing the wicked. She cannot be honest with humans and this often causes misunderstandings. However, she is full of maternal love and kindness deep down.

Suzuki Fuku as Bello
A 6-year-old monster who genuinely yearns to become a human being. He fears nothing and acts on his own. As a result, he tends to get involved in incidents. Because he is a child physically and mentally, he is not able to coordinate his ability and needs the help of Bem and Bella.

Kitamura Kazuki as Natsume Akinori
Although he is an ace detective, his superior and subordinates tend make a fool of him, and he has no hope of getting ahead because of his kind heart and devotion to his family. He gradually builds a friendship with Bem, but learns that he is a monster … …

Agata Morio as Professor Ogata
A professor who does biology research at a university. He has the same walking stick as Bem, but … …

This blog contains information and musings on current and upcoming Japanese dramas but is not intended to be comprehensive.
View all posts by jadefrost →
This entry was posted in Fall 2011 Dramas, NTV and tagged Anne, Kamenashi Kazuya, Kitamura Kazuki, Suzuki Fuku, Youkai Ningen Bemu. Bookmark the permalink.