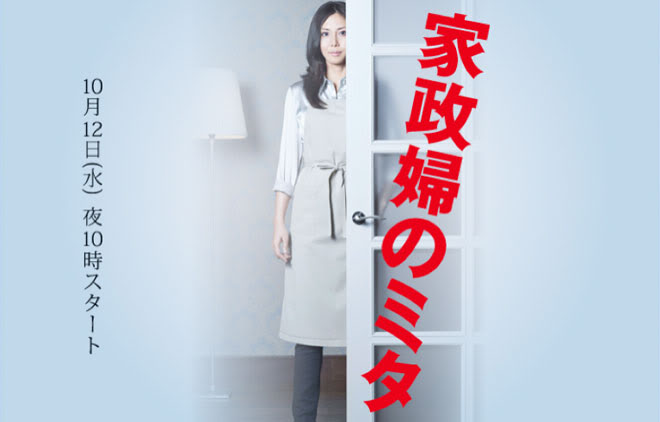 Story
Mita Akari is a super housewife who performs whatever work she has been asked to do to perfection. However, she does not smile or flatter, and always has an expressionless face. Mita has been sent to the Asuda family. Nagiko, the wife of Keiichi, who is the head of the family, had just passed away in an accident. Her death has given their four children, Yui, Kakeru, Kaito and Kii a huge shock and the family splinters. The inside of the house is also in wild disorder. Mita tidies it up such that it is beyond recognition. If cockroaches run out, she would catch them and toss them out the window. She reels off the answers to arithmetic questions that stump Kaito, and is good at cooking too. Her performance on the job is a surprise to the Asudas. Meanwhile, Nagiko’s younger sister, Urara, visits the Asuda household and proposes holding a birthday party for Kii two days later. Kii’s response when asked what she would like as a present is “to meet mum.” Urara agrees to let her meet her mother. The next day, when Mita picks Kii up at her kindergarten, her friends have made her cry and caused an uproar. As they pass the river where Nagiko drowned on the way back home, Kii asks Mita to go with her to meet her mother. Mita takes some action in response to these words … …

Characters
Matsushima Nanako as Mita Akari
A super domestic helper who does housework such as cooking and washing to perfection. However, she does not smile or fawn on others, is always emotionless and her expressions cannot be read at all. She does whatever work she is tasked with in the same way. At times, that surprises the people around her and the parties concerned have to look reality in the face.

Hasegawa Hiroki as Asuda Keiichi
The head of the sales division with Sawai Homes, a home builder. He had a “shotgun” marriage with Yuki Nagiko, who is two years his senior. She bore him four children – Yui, Kakeru, Kaito and Kii – but he has little consideration as a father, and feels suffocated when he is with his family. The times when he feels relaxed are when he is in the toilet or car.

Aibu Saki as Yuki Urara
The younger sister of Asuda Keiichi’s wife, Nagiko and a physical education teacher at the high school that Keiichi’s eldest daughter, Yui, attends. She has a cheerful nature, but the things she does always backfires on her because she cannot read situations. Keiichi’s children annoy her by saying, “It’s no good to have Urara come.”

Hiraizumi Sei as Yuki Toshiyuki
The father of Asuda Keiichi’s wife, Nagiko. A former school principal. He has detested Keiichi since the start of the marriage and believes that Keiichi is to blame for his daughter’s death.

Kutsuna Shiori as Asuda Yui
Asuda Keiichi’s eldest daughter. A second year high school student who belongs to the photography club. Her mother’s death came as a shock to her and she cannot put her heart and soul in photography. Because she hates home, she wishes to get out of it as soon as possible. She thinks that she does not have to pull herself together at home, but gets irritated when things go wrong.

This blog contains information and musings on current and upcoming Japanese dramas but is not intended to be comprehensive.
View all posts by jadefrost →
This entry was posted in Fall 2011 Dramas, NTV and tagged Aibu Saki, Hasegawa Hiroki, Kaseifu no Mita, Matsushima Nanako. Bookmark the permalink.