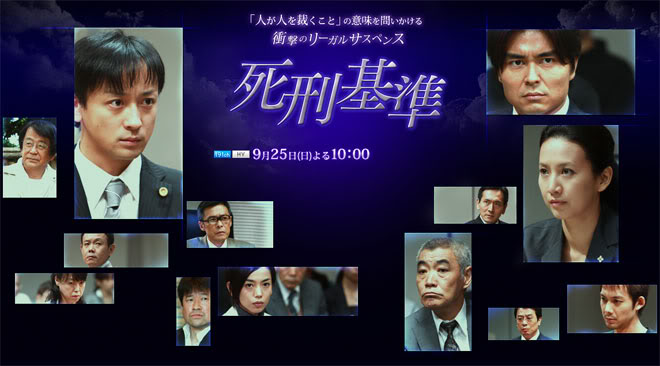 Introduction
Do criteria exist for the death penalty? Mito Yusuke, a law faculty lecturer who did not become a lawyer even though he passed the bar exam, the famous lawyer Otomo Kojiro who advocates the abolition of the death penalty, and the public prosecutor Nagase Mariko studied law together. Each have their own thoughts about the death penalty. One day, Otomo’s wife is murdered by someone. Sabae Shinzo who is resentful of a lawsuit that Otomo had been in charge of, is arrested as a suspect. Otomo reverses the stance he had had until now and seeks the death penalty against Sabae. This prompts Mito to make the decision to become a lawyer and stand in the court. However, the first case Mito takes charge of is the defence of Sabae, who murdered the wife of his good friend, Otomo … …

Characters
Yamamoto Koji as Mito Yusuke
A lecturer at a university’s faculty of law. He works as a lecturer even though he passed the bar. He has not expressed a definite opinion about the death penalty.

Ozawa Yukiyoshi as Otomo Kojiro
A lawyer who has been playing an active role as an opinion leader advocating the abolishment of the death penalty. Then, his wife is murdered by someone.

Toda Naho as Nagase Mariko
A prosecutor with the Public Prosecutor’s Office. She spent time at the bottom rung in the countryside before working in Tokyo. She has a strong sense of justice and is proud of her duties as a prosecutor.

Kashiwabara Takashi as Sabae Shinzo
The suspect in the murder of Otomo Kojiro’s wife. He lost his daughter’s murder case and hates Otomo, who had represented the suspect in that trial and allowed him to avoid the death penalty.

Kyono Kotomi as Iijima Noriko
A reporter for Tohto TV’s news department. She is carrying out her own interviews on the death penalty and shrewdly pins Otomo Kojiro down on his remarks and behaviour after his wife’s murder.

Mitsuishi Ken as Karita Kazuho
A lawyer who supports the abolishment of the death penalty. The former teacher of Mito Yusuke and Otomo Kojiro. He is representing Sabae Shinzo.

Sato Jiro as Hoshino Takeshi
A reporter for Tohto Newspaper’s business news desk. He is Iijima Noriko’s senior and understands her well. He feels strongly about reporting on the case.

Kaneda Akio as Ishimaru Ryusuke
The head of the Criminal Affairs Division. The boss of Tsushima Kyusaku. He is in charge of Sabae Shinzo’s case.

Emoto Akira as Tsushima Kyusaku
A detective approaching retirement age who has doubts about the case. He has never laid a false charge against a person during his career as a detective.

Hirooka Yuriko as Togane Toshiko
The witness who saw Sabae Shinzo in the murder of Otomo Kojiro’s wife. She takes the witness stand at the trial.