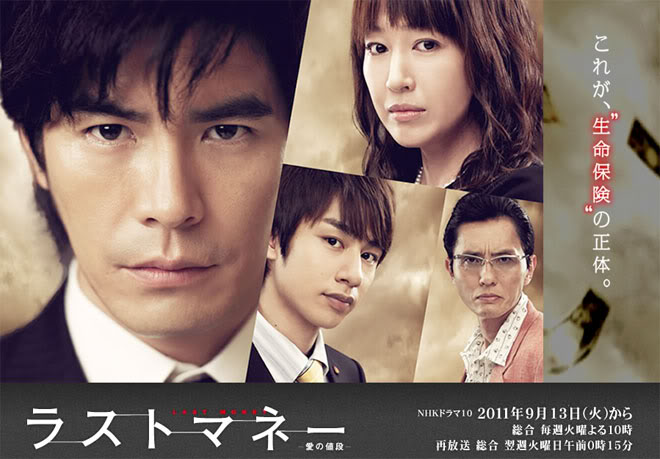 Story
Mukojima Sakutaro belongs to life insurance company Seiwa Life’s Insurance Assessment Department. He probes all kinds of cases such as murders for insurance money, hospital insurance scams, and payments to false claimants and suicide victims, with the investigator Kisaragi Hiro to determine if payouts should be made. One day, he attends the funeral service for Yokomura Kazuki, a senior at his company. While there, he notices a woman in mourning clothes. She is Sasakura Akiko … … One month ago, Mukojima was involved in a case in which a car plunged from a cliff, killing a couple and their two children. Only the wife’s mother, Chikusa, was saved. The beneficiary of the husband’s insurance payout was the wife, but because both his wife and children had died at the same time, his wife’s parents will be paid the money. However, if the husband had died later than his wife, it would have been allocated to his parents. The fate of the insurance payout hinges on the order in which the lives were lost in the accident. Why does Chikusa have little to say? The husband’s parents ask for a reinvestigation of the circumstances of the accident. A twisted parent-child love and the family’s last moments emerge while Mukojima studies the case with Ono Keigo.

Characters
Ito Hideaki as Mukojima Sakutaro
An employee with the Insurance Assessment Department’s Special Cases Investigation Group at Seiwa Life. He dispassionately probes whether claimants are entitled to insurance payouts, starting with murders and hospital insurance scams. He is perceptive of the true nature of people which is revealed in front of money. He thoroughly investigates with Kisaragi Hiro and makes no compromises. There are times when he makes judgments that seem to be merciless. In the past, he would be influenced by his emotions and make payouts without sufficient investigation. His changed attitude stems from some setback five years ago.

Nakamaru Yuichi as Ono Keigo
A newly-recruited employee who is under training with the Insurance Assessment Department’s Special Cases Investigation Group at Seiwa Life. Although a soft-hearted, enthusiastic person with a deep sense of righteousness, he is also a little rash. The unexpected human relationships lurking behind insurance payouts comes as a shock to him and he alternates between joy and sorrow. Mentored by Mukojima Sakutaro, he accompanies him in investigations and also works at gathering evidence. Finding Mukojima cold and merciless, he initially rebels against him, but comes to respect and admire Mukojima when he gets to know him.

Matsushige Yutaka as Kisaragi Hiro
The chairman of Kisaragi Research, a one-man operation engaged by Mukojima Sakutaro to do investigations. An “outlaw” type who used to be involved in somewhat dangerous incidents. He is aloof in his work, but actually detests injustice more than Mukojima does. He decided from the outset that Sasakura Akiko is a criminal with designs on murder to obtain insurance money.

Tanaka Tetsushi as Yokomura Kazuki
Mukojima Sakutaro’s senior from university days who now works in Seiwa Life’s Sales Department. He became acquainted with Sasakura Akiko when he was transferred to the Miura branch office. He decides to abandon his life of quotas and loveless family, after experiencing her unaffected kindness. However, he ends up embezzling the company’s money frequently because of her … …

Ibu Masato as Todo Mitsuaki
Seiwa Life’s executive managing director. Although he came from the Insurance Assessment Department and values its work which enables Seiwa Life to make insurance payouts more quickly than other companies, he also presses Mukojima Sakutaro to make judgements based on company logic rather than justice.

Natsuyagi Isao as Mizutani Toshiro
An old man who continuously watches over his unconscious, bedridden grandchild. He keeps on turning down Mukojima Sakutaro, who has been coming to visit on a routine basis since the incident five years ago, but eventually begins to appreciate Mukojima’s sincerity … …

Takashima Reiko as Sasakura Akiko
A single mother who works at a fish market procesing factory in the Miura peninsula and the woman who had an affair with Yokomura Kazuki. She grew up in Niigata Prefecture, and has been moving from place to place with her son, Sho, following her husband’s death. She had asked Yokomura, who visited her frequently, if he would take out an insurance policy for her and is suspected of being involved in murder-for-insurance in relation to his suicide. Her charm was such that the men involved with her would say, “There’s never been a woman who’s that kind and affectionate. If I’ve been fooled, it was good that I was.”

This blog contains information and musings on current and upcoming Japanese dramas but is not intended to be comprehensive.
View all posts by jadefrost →
This entry was posted in NHK, Summer 2011 Dramas and tagged Ibu Masato, Ito Hideaki, Last Money, Matsushige Yutaka, Takashima Reiko, Tanaka Tetsushi. Bookmark the permalink.