Posted on September 2, 2011 by jadefrost 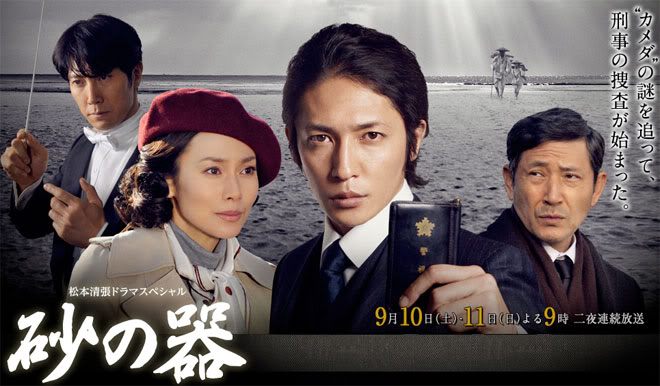 Introduction
In the early dawn of 11 December 1960, the murdered body of a middle-aged man is discovered at a shunting yard within the premises of Tokyo’s Kamata station. His face has been smashed to the extent that he cannot be recognised, but it is determined that he was strangled and not beaten to death. It is presumed that he was strangled after being put to sleep, and his face battered once he was dead. A dodgy man emerges in the investigation task force’s door-to-door investigation. On the night before the murder, there had been two men at a bar near Kamata station and one of these men matched the victim’s appearance. Furthermore, the victim used words that appeared to be Tohoku dialect, while the man who seemed to be the criminal said “Kameda has not changed at all”. These are cited as important evidence, and a large-scale investigation around ‘Kameda’ begins. The female news reporter Yamashita Yoko suggests to Detective Yoshimura Hiroshi of Nishi Kamata Police Precinct, who has joined the task force as one of its members, that ‘Kameda’ may be the ‘Ugokameda’ in Akita prefecture. So Yoshimura heads to Akita. He and veteran detective Imanishi Eitaro from the First Investigative Division obtain information about the sighting of a suspicious-looking man for several days since the murder occurred. However, they have no other leads besides this … … The only incident lodged in Yoshimura’s memory is the figure of the up-and-coming music composer, Waga Hideyoshi whom he had chanced upon at the train station, and the existence of the ‘Nouveau Group’ for young, cultured intellectuals, which Waga belongs to.

Characters
Tamaki Hiroshi as Yoshimura Hiroshi
A young detective with Nishi Kamata Police Precinct. He respects the veteran detective Imanishi Eitaro. He is tenacious in investigations.

Nakatani Miki as Yamashita Yoko
A reporter with Maicho Shimbun and a woman in the forefront of the times. She is in a romantic relationship with Yoshimura Hiroshi but draws a line between work and private life in a businesslike manner.

Sasaki Kuranosuke as Waga Hideyoshi
An up-and-coming music composer with a dark past. He has captivated the whole country with the pieces ‘Nirvana’ and ‘Eternity’.

Kobayashi Kaoru as Imanishi Eitaro
A veteran detective of the Tokyo Metropolitan Police’s First Investigative Division. Haiku is his hobby and he has a good-natured personality, but once he gets into an investigation he will be so completely absorbed in it that he forgets to eat and sleep.

Kobayashi Nenji as Tadokoro Shigeyoshi
Tadokoro Sachiko’s father. An influential politician and a member of the Diet. He has accepted Waga Hideyoshi.

Nishimura Masahiko as Inspector Tajima
An ambitious inspector at the Tokyo Metropolitan Police. He repeatedly clashes with Yoshimura Hiroshi and Imanishi Eitaro, but is devoted to the investigation.

Hashizume Isao as Miki Kenichi
A sundries retailer in Okayama Prefecture. He is well liked by everyone because of his numerous good deeds when he was a police officer.

Yamamoto Manabu as Honura Chiyokichi
Miki Kenichi had been saved by him in the past.

This blog contains information and musings on current and upcoming Japanese dramas but is not intended to be comprehensive.
View all posts by jadefrost →
This entry was posted in Fall 2011 Drama Specials, TV Asahi and tagged Hashizume Isao, Kobayashi Kaoru, Matsumoto Seichou, Nakatani Miki, Osugi Ren, Sasaki Kuranosuke, Suna no Utsuwa, Tamaki Hiroshi. Bookmark the permalink.