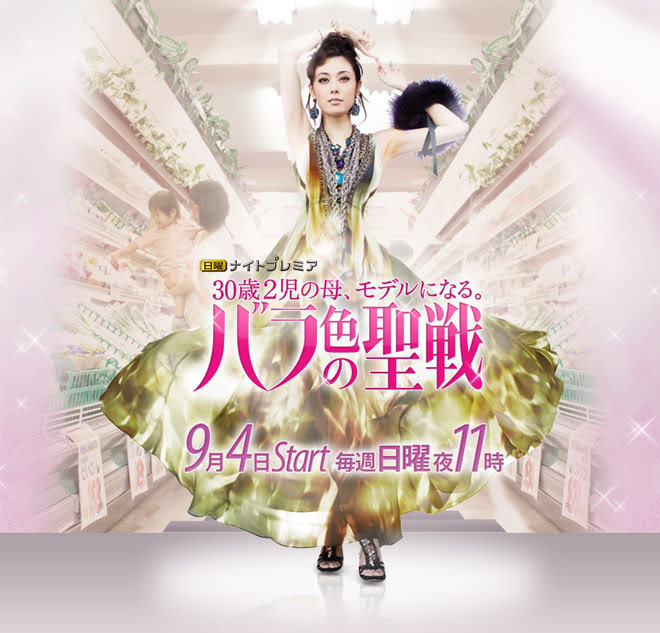 Story
Housewife Miki Makoto is busy taking care of her young son and daughter as well as housework. She pays no attention to her unkempt hair and hunched posture. She tells herself, “My husband can work in peace because I’m a housewife. It’s more important to do housework everyday than looking beautiful!” But one day, she discovers that her husband, Atsushi, has been having an affair with his subordinate. Her happy day-to-day life crumbles. Furthermore, she has to suffer the humiliation of acting as the go-between for the other woman at a wedding ceremony and even play attendant to the young, pretty bride. Makoto performs this admirably with her head held high, and radiates more dignity than she thinks. This radiance captures the attention of the professional cameraman, Asano Koki … … After the wedding ceremony, Makoto reconsiders her own life. Wishing to regain the feelings of her husband who no longer sees her as a woman, she decides to apply to be an amateur model for a cosmetics company and takes her first step into the world of beauty!

Characters
Fukiishi Kazue as Miki Makoto
An ordinary housewife who has two children with her husband, Atsushi. His affair motivates her to go through the world of amateur modelling with her sights set of becoming a professional model. Her weapons are her height, which has made her feel inferior since childhood, and extraordinary will power. She usually tends to be careless and rigid, but on the other hand, shows a surprising ability to thrive on adversity when pushed into unfavourable situations. Because of her characteristic pluck and spirit, she displays a startlingly dignified look, and starts to blossom as if kicking off her shell. She loves her husband deeply, but without his understanding about her modelling work, she gradually starts to have doubts about her love.

Ashina Sei as Nakanishi Sara
A housewife like Miki Makoto, she applied to be amateur model, but because of the network of contacts she gained with sponsors, she made a glamorous debut as a professional model. She and top model, Tamiya Akane, now share the limelight. She divorced from her husband and is engaged to the son of the owner of a major cosmetics manufacturer. Although she sells luminous beauty, she is, in fact, a hard-nosed, ruthless woman who will do whatever she has to drag a person down if that person hinders her progress. She treats Makoto with bitter animosity.

Hasegawa Tomoharu as Miki Atsushi
Miki Makoto’s husband. A bank employee who was recruited mid-career, but his a section head at the young age of 35 as a result of his capability. He has masculine charm and is highly regarded by the females in his company. So when he gives a female subordinate advice on marriage, it develops into an affair. Although he cherishes Makoto as a family member, he no longer sees her as a woman. And because he thinks that a housewife should devote herself to household chores and child rearing, he is naturally fiercely against her ambition to become a model. He only perceives it as play instead of a job, and always has an indifferent attitude.

Takizawa Saori as Tamiya Akane
A top model who is both popular and talented. Because she is an arrogant person with a sharp tongue, she says what she thinks and there are also times when she would make blood freeze. However, she has unswerving confidence as a professional model and firm powers of persuasion. She is proud of her modelling job and that way of life becomes the guide for Makoto who sets her sights on being a professional model.

Kaname Jun as Asano Koki
A professional cameraman who is very popular with models. A handsome man with a magnetic personality. The models would flock around him to have their photographs taken. He does not just look at a person’s physical appearance, but also sees her true nature, and has a genuine ability to draw that out. He is the first one to spot Miki Makoto’s talent as a model. Ever since then, he would lend her a helping hand when she finds herself caught in a bind. He is a reassuring presence to her. Because he used to be a designer, he has started a fashion brand with his friend(s) and perseveres in working his way up.

Inoue Jun as Hoshino Susumu
Miki Makoto’s father. He and Makoto’s mother, Chiyoko, were both against her reckless challenge to be a model. However, they decided to give her their support when they learnt of her strong desire. He dotes on his two grandchildren, and while he looks displeased when Makoto comes to drop them off, he is secretly happy inside.

Natsuki Mari as Kawase Madoka
The president of the modelling agency ‘Wave Agency’. She discovers Miki Makoto’s aptitude when Makoto visits with the desire to become a professional model, and takes her in as a member of the agency. The agency occupies a room in a multi-tenant building which can hardly be called respectable. Although it is a small outfit with five people including Makoto, Madoka enjoys the trust of her models because of her dynamic personality.

This blog contains information and musings on current and upcoming Japanese dramas but is not intended to be comprehensive.
View all posts by jadefrost →
This entry was posted in Summer 2011 Dramas, TV Asahi and tagged Ashina Sei, Barairo no Seisen, Fukiishi Kazue, Natsuki Mari. Bookmark the permalink.