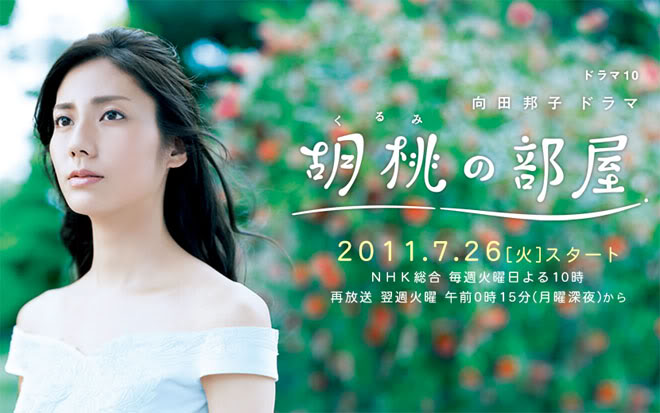 Story
In Tokyo in the 80s, Mitamura Tadashi suddenly disappears one day after being laid off. The Mitamuras had been an ordinary, happy family until then, but numerous problems are brought to light. Saddled with her mother, Ayano, and two younger siblings, Momoko, the second daughter, struggles to support the family in her father’s stead. While they pray for his safety, Momoko is told of her father’s whereabouts by his subordinate, Tsuzuki Minoru. It appears that he is living with the proprietress of an oden shop in an apartment in the downtown district. A shocked Momoko goes to the apartment to try to bring him back home. They meet but … …

Characters
Matsushita Nao as Mitamura Momoko
The Mitamura family’s second daughter. An editor who works at a publisher of illustrated books. She has a serious personality. She learns of her mother’s sorrow and of the family’s problems and decides to try to protect the family on her father’s behalf.

Kanie Keizo as Mitamura Tadashi
Mitamura Momoko’s father. A stubborn, stern father of the Showa era. He devoted himself to working for his company, but was suddenly retrenched and lost his job. Then he went missing … …

Takeshita Keiko as Mitamura Ayano
Mitamura Momoko’s mother. A good wife and wise mother who waited on her husband, but she gradually loses her mental stability as a result of his disappearance.

Igawa Haruka as Shimizu Sakura
The Mitamura family’s eldest daughter. A beauty who knows how to get ahead. She married one of the elite from a trading company and lives in affluence. It seems that she is a winner in life, but is tormented by her husband’s infidelity.

Seto Koji as Mitamura Kentaro
The Mitamura family’s only son. A third year student at a private university, he is preparing for his job hunt. But with the disappearance of his father, he begins to question his own way of life.

Usuda Asami as Mitamura Yoko
The Mitamura family’s third daughter. She works part time at a cafe while aiming to get married to a rich doctor. She feels inferior to her successful older sisters.

Nishida Naomi as Onda Setsuko
She runs a small oden shop at Uguisudani. She meets Mitamura Tadashi who has no where to go and lets him stay at her own apartment.

Harada Taizo as Tsuzuki Minoru
Mitamura Tadashi’s former subordinate. He admires and respects Mitamura, and became Momoko’s confidant after her father’s disappearance. He actually has a wife and daughter but left his family.

This blog contains information and musings on current and upcoming Japanese dramas but is not intended to be comprehensive.
View all posts by jadefrost →
This entry was posted in NHK, Summer 2011 Dramas and tagged Harada Taizo, Igawa Haruka, Kurumi no Heya, Matsushita Nao, Nishida Naomi, Seto Koji, Usuda Asami. Bookmark the permalink.