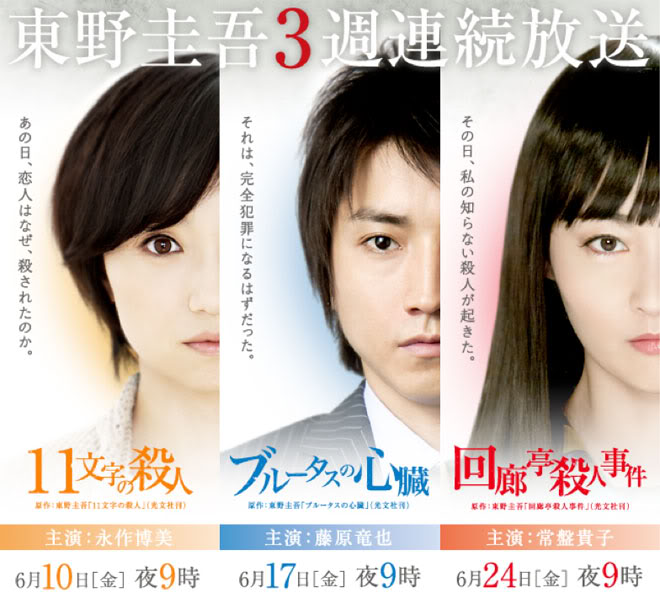 11-moji no Satsujin
Date: From 9.00 p.m., 10 June 2011
Cast: Nagasaku Hiromi, Hoshino Mari, Harada Ryuji, Hasegawa Tomoharu, Mashima Hidekazu, Asari Yusuke, Hinata Nanami, Adachi Yumi, Ishiguro Ken
Synopsis: Kawazu Masayuki (Hasegawa Tomoharu), the boyfriend of female mystery writer, Yuki Rikako (Nagasaku Hiromi), confides to her that he is being targeted by someone. Ever since Rikako burst into the limelight with a literary prize for her novel ‘Mawari no Mori’, she has completely been unable to write for three years for some reason. Hagio Fuyuko (Hoshino Mari), her editor and good friend, has been supporting her and praying that she gets out of this slump. In fact, Fuyuko had been the one to introduce Masayuki. Then, Masayuki’s dead body is found. The police say that they do not yet know if it was an accident or a suicide. Rikako, who is told things such as a recent cut back in Masayuki’s part-time work and his debts, realises that she actually does not know much about him. As she stand motionless on the bridge where his dead body was found, she resolves to find out the truth behind the murder by herself. Rikako has kept the luggage that had been Masayuki’s favourite while he was alive, at his apartment. ‘Yamamori Sports Plaza’ was mentioned in his appointment organiser a few days before his death. Rikako doubts that he could have gone to the gym since his feet had hurt, and so she visits the owner, Yamamori Takuya (Ishiguro Ken), together with Fuyuko. The two of them encounter his secretary, Harumura Shizuko (Adachi Yumi) over there. Yamamori has a wife, Masae (Akama Mariko), and a daughter, Yumi (Hinata Nanami), who is visually impaired. The people she meets are killed one after another. Who is it? And why? The key to the entire mystery appears to be a fatal water accident on a cruise tour a year ago. A letter bears 11 characters, “Murderous intent because of Mujinto”. What happened on Mujinto?
Website: wwwz.fujitv.co.jp/higashinosp/11moji.html

Brutus no Shinzo
Date: From 9.00 p.m., 17 June 2011
Cast: Fujiwara Tatsuya, Uchiyama Rina, Kato Ai, Okura Koji, Ashina Sei, Kondo Yoshimasa, Takahashi Tsutomu, Otoo Takuma, Oshinari Shugo, Hakamada Yoshihiko, Tsurumi Shingo, Kazama Morio
Synopsis: Suenaga Takuya (Fujiwara Tatsuya) is engaged in the development of a robot for the industrial instrument manufacturer, MM Heavy Industries. Nishina Toshiki (Kazama Morio) is the president of the company. The husband of Nishina’s eldest daughter, Munekata Shinichi (Tsurumi Shingo), and Nishina’s son, Naoki (Hakamada Yoshihiko), are in MM Heavy Industries, but the ambitious Takuya aspires to work his way to become the future husband of Nishina’s daughter, Seiko (Ashina Sei), and also a contender for the position of next president. A celebration party is held for MM Heavy Industries’ President’s Award and Invention Incentive Award. Takuya wins the President’s Award for the development of an operation system called ‘Brutus’. It is recognised as a groundbreaking invention that will bring about a revolution in the robotics industry. On the way home from the celebration party, Takuya is asked by Nishina to go out with Seiko. It appears that he has been accepted as her future husband. Takuya mutters to ‘Brutus’, “I will go around to the ruling side in the near future. The only thing lacking is power. I will also lay my hands on it soon.” At that moment, he is informed that Amamiya Yasuko, his ex-girlfriend who is also Nishina’s secretary, is pregnant and she blackmails him for child support. Takuya is not the only man whom Yasuko has had a relationship with and he does not know whose child it is. However, he is in a quandry, for if this is revealed, his ambitions will be dashed. One day, Takuya is summoned by Naoki, who is also his boss. Naoki wants to have a word with him. In fact, he has not only called Takuya but also his colleague Hashimoto Atsushi (Okura Koji). The three of them have been involved with Yasuko and are being blackmailed in the same way. Then Naoki confides in the two of them a joint plan to murder Yasuko. According to his plan, the three of them will take the body on a relay connecting Osaka, Nagoya and Tokyo in order to furnish themselves with alibis. A will be the person who kills Yasuko, B will be the person who transports the dead body and C will be the person who gets rid of it. At Naoki’s suggestion, their roles are to be decided by playing cards. The three of them will draw up a jointly sealed covenant that states that they conspired in the murder of Amamiya Yasuko, so that the other two will not betray A after A kills her. They agree that this will be kept with A and proceed to draw playing cards. It is decided that Naoki will murder Yasuko in Osaka, transport the dead body to Nagoya. From Nagoya, Takuya will bring it to Atsugi where Hashimoto will take over. After he takes it to Tokyo, he will dispose the body. Thus begins a relay connecting Osaka, Nagoya and Tokyo for the perfect murder. However, the plan unravels because of an unexpected incident … …
Website: wwwz.fujitv.co.jp/higashinosp/brutus.html

Kairoutei no Satsujin Jiken
Date: From 9.00 p.m., 24 June 2011
Cast: Tokiwa Takako, Naito Takashi, Tanaka Kei, Tanaka Tetsushi, Cho Tamiyasu, Tokunaga Eri, Riki Mari, Kokusho Sayuri, Toyota Maho, Matsuo Satoru, Kitamura Soichiro, Ibu Masato, Hiraizumi Sei, Katahira Nagisa
Synopsis: Kiryu Eriko (Tokiwa Takako) is the secretary of Ichigahara Takaaki (Kitamura Soichiro), who made a great fortune in his lifetime. Eriko has an ugly scar as a result of a burn during her childhood, but Takaaki did not care the least and had complete confidence in her. His health deteriorated because of old age, and he died. The ritual for the 49th day after his death is held at the upscale Japanese inn, Kairoutei, and his will is to be read. Takaaki’s family – his younger brother Sosuke (Ibu Masato), mother-in-law’s younger brother and sister, Naoyuki (Tanaka Tetsushi) and Yoko (Toyota Maho), sister-in-law Kiyomi (Katahira Nagisa) and other members are gathered at Kairoutei. A stunningly beautiful female called Honma Michiyo (Tokiwa Takako) turns up at the inn. Michiyo is the daughter of Honma Kikuyo (Iguchi Kyoko), whom Takaaki had trusted. No one talks about it, but in their hearts, they are very much anxious about Takaaki’s will which will be disclosed the next morning. Michiyo makes provocative remarks in front of the family that leave them flabbergasted. The Michiyo standing before them is actually Eriko who has undergone cosmetic surgery so that she can look like her. Eriko had attempted a double suicide at Kairoutei with her boyfriend, Satonaka Jiro (Tanaka Kei) in the past, allegedly jumping to her death because of the shock. However, the truth is that Jiro had been killed by someone, and Eriko had “survived” the fake suicide in order to find Jiro’s killer and avenge him. Then, on the night before the reading of the will, the first murder, which Eriko herself had not imagined, takes place … …
Website: wwwz.fujitv.co.jp/higashinosp/kairou.html