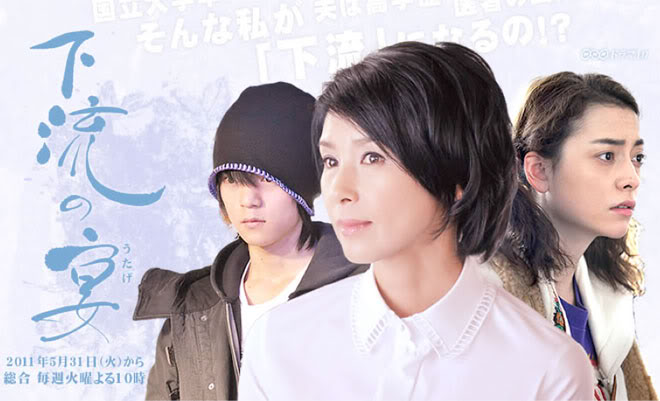 Story
Housewife Fukuhara Yumiko is agonising over her son, Sho. He has been working part-time at a manga cafe after he dropped out of high school and continued even when he turned 20. Yumiko encourages him to take the high school equivalency test and go to university, but he does not feel like doing anything at all. She criticises him for being a “good-for-nothing” and “not qualified to live”! Because of that, Sho leaves home. A few days later, Yumiko visits the manga cafe at the shopping and entertainment district, and catches sight of Sho. When she questions him, he tells her that he hit it off with Miyagi Tamao, a girl he met through computer online gaming, and is now living in her room. In addition, he discloses that he intends to marry Tamao and Yumiko is taken by surprise. Yumiko had lost her doctor father at a young age and was raised by her mother “not to drop to the lower class”. She discusses this crisis with her husband, Kenji, and daughter, Kana, but nothing comes out of it. And so, she ventures to meet her childhood friend Shimada Naoki, who is now a charismatic exam instructor … …

Characters
Kuroki Hitomi as Fukuhara Yumiko
She married Fukuhara Kenji after graduating from a national university. As a full-time housewife, she provided their two children with good education and thought she had built the ideal, middle-class family. However, her son, Sho, became a part-time worker. Furthermore, he suddenly declares that he will be marrying a girl that he met through the internet, and she gets a shock.

Kubota Masataka as Fukuhara Sho
Fukuhara Yumiko’s 20-year-old son. He dropped out of high school and works part-time at a manga cafe. He starts living with Miyagi Tamao whom he met through the internet, and promises to marry her.

Minami as Miyagi Tamao
Fukuhara Sho’s 22-year-old live-in partner who hails from Okinawa. She works part-time at a thrift shop.

Watanabe Ikkei as Fukuhara Kenji
Fukuhara Yumiko’s husband. A graduate of Waseda University’s department of science and engineering. He is a salaryman at a major electric company and has now gone over to its subsidiary.

Yo Kimiko as Miyagi Yoko
Miyagi Tamao’s mother. After she divorced Tamao’s father, she has been running a cafe and bar on the Southern Ryukyu islands.

Nogiwa Yoko as Kinoshita Mitsue
Fukuhara Yumiko’s mother. After the death of her husband who had been the town’s physician, she had raised their daughters, Yumiko and Taeko, while leading a life of poverty.

This blog contains information and musings on current and upcoming Japanese dramas but is not intended to be comprehensive.
View all posts by jadefrost →
This entry was posted in NHK, Spring 2011 Dramas and tagged Karyu no Utage, Kubota Masataka, Kuroki Hitomi, Nogiwa Yoko, Yo Kimiko. Bookmark the permalink.