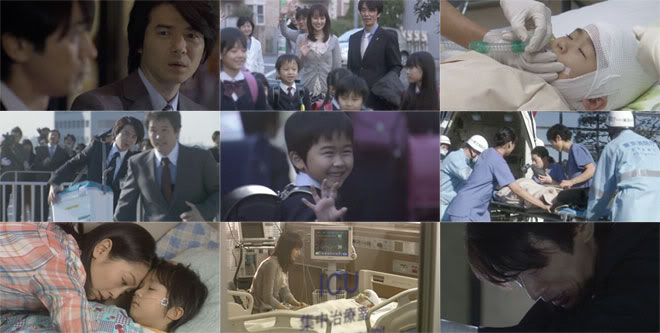 Yui’s confession of abuse prevents Takeru’s organs from being harvested, but she cannot be charged because there is insufficient evidence against her. Even though Detective Enomoto persists in the investigation and tries to find out if Takenouchi had knowingly covered up possible evidence of Takeru’s abuse, he is not able to make any headway.

Kuramoto and his wife, Yuri, are notified that their son, Makoto, had met with an accident while going to school in a group. They quickly rush to Seishu Medical University Hospital. Ohno, who overhears this news at the organ transplant support centre, heads to the hospital out of worry for Kuramoto. However, Kuramoto regards his appearance with an uncomfortable expression. He confesses that it was the first time he understood why an organ transplant coordinator is called the god of death … …

In the midst of this, the Kuramotos are told by the attending physician that although Makoto’s surgery was a success, it will be very difficult for him to make a recovery. With these words in mind, they make the decision to donate their son’s organs. Makoto is to become the country’s first organ donor under the age of 15.

On the other hand, Miki, who had to accept that her son’s organ transplant was off as a result of Takenouchi General Hospital’s scheme, gets help from Kanoko. At Kanoko’s persuasion, she decides to sue Takenouchi and his hospital. Detective Enomoto learns about this and turns up to pledge his support to Miki during the trial. It is agreed that she will file the suit at the courthouse tomorrow.

The next day, Miki is informed that there is an organ donor just as she is about to leave the hospital for the courthouse. However, her elation is short-lived. Takenouchi exerts pressure by casually mentioning that a child at Mizuno Chuo Hospital whose condition is as serious as Kaito’s may get onto the organ recipient list. He stresses that the order of precedence on the list is based on doctors’ reports and assures her that the hospital will ensure that her son does not get an infection again … …

Miki does not show up at the courthouse at the appointed time. Just as Kanoko is notified about this, a troubled Miki appears in front of her and apologetically says that she will not go ahead to file the lawsuit because she wants to save her son. His turn has finally come after a four-year wait. Kanoko, who knows that Takenouchi is behind this, cannot hide her disappointment.

Before long, the procedure to pronounce Makoto brain dead is conducted with the consent of the family. Kuramoto remains calm and composed through it all.

Makoto’s organs are harvested and Ohno carries the ice box containing his heart up to the helipad on the hospital’s rooftop. As he is about to hand the box to a staff member aboard a waiting helicopter which will transport it to Zisei Hospital, Kuramoto suddenly appears from behind, snatches the box and runs away. Ohno gives chase but loses sight of him. No one can make sense of this unexpected turn of events which creates a furor among the media who are broadcasting live coverage of the scene.

Ohno finally finds Kuramoto sitting in corner of the hospital carpark with the ice box cradled in his lap. Kuramoto thinks back to the day his son was born and voices wonder at this new life in his arms. “Is organ donation a good thing?” he asks Ohno, who hesitates to reply and instead starts reciting a passage from Makoto’s essay about his school’s sports day. The usually cool and collected Kuramoto gets emotional … …

A short while later, Kuramoto carries the ice box up to the rooftop accompanied by Ohno. While confused television crews watch on, he passes it to Ohno, who says as he hands it over to the staff aboard the helicopter, “This is not an object. This is Kuramoto Makoto. Please take good care of him.”