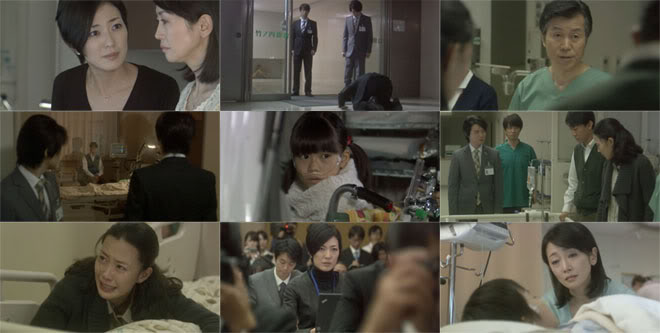 Learning that Saito is in collusion with Takenouchi and had manipulated the recipient list in order to save his own granddaughter, Ohno tries hard to halt the heart transplant in one way or another. Even the organ transplant support centre can do nothing about the injustice because the hospital’s “assessment” and “diagnosis” are given priority.

Nonetheless, Ohno disregards Kuramoto’s attempt to hold him back and appeals to Takenouchi. However, Takenouchi, who has decided to do whatever it takes for the advancement of organ transplants, is adamant … … He dismisses Ohno’s pleas of fairness as that of a fool’s dream. Ohno feels a sense of despair … …

Meanwhile, Detective Enomoto, who feels uncomfortable with Takenouchi’s dubious behaviour, continues to investigate Takeru’s abuse by his mother and desperately tries to get hold of evidence of Yui’s mistreatment in order to head off the transplant.

At that same moment, Kanoko also takes it on herself to gather information, but the time for the surgery to remove the organs draws closer by the minute … …

All this while, Yui and Miki have been grappling with conflicting emotions. Yui looks back on the days she had shared with her son, the secret between them, and agonises about becoming a donor family; a heartbroken Miki, who has guessed that Rika will be the organ recipient, suffers in silence as she watches the joy and anticipation of Saito and his daughter.

Ohno is paralysed by his own helplessness and cannot accept it when Kuramoto coolly tells him that the only thing they can do now is to quietly proceed with the preparations.

The time for the surgery finally comes. It is a day which the organ recipients have dreamt of and patiently waited for. Ohno seeks final consent from the Tezukas. Takahiro gives his permission. Yui, who has not been able to talk about her abusive treatment of their son, feels the weight of her guilt when they discover that Takeru has lost a tooth. He is growing up, even though he is brain dead.

Just as the staff are about to wheel Takeru into the operating theatre, Yui suddenly rushes forward and grabs her son’s body close to her own. “I abused him! I was the one who killed him!” She cries out to the shock of everyone. At that moment, Detective Enomoto finds the evidence that he has been looking for on footage taken from a surveillance camera at a supermarket.

Organ transplant from an abused and brain dead child is prohibited by law. The transplant surgeries are stopped as a result of Yui’s confession.

Saito is beside himself with rage when he is notified of the turn of events. Unable to reach Nakamura Koichi, the director of the Ministry of Health, Labour and Welfare’s Office of Organ Transplant Policy, as well as Takenouchi, he frantically hurries to Takenouchi General Hospital and encounters Kuramoto and Ohno there. In desperation, he kneels down on the ground in front of the two men, begging them to save Rika. But given the circumstances, there is nothing that anyone can do … …

At Zisei Hospital, Kanoko tries to persuade Miki to expose the wrongdoing of Takenouchi and the others in order to pursue the truth.