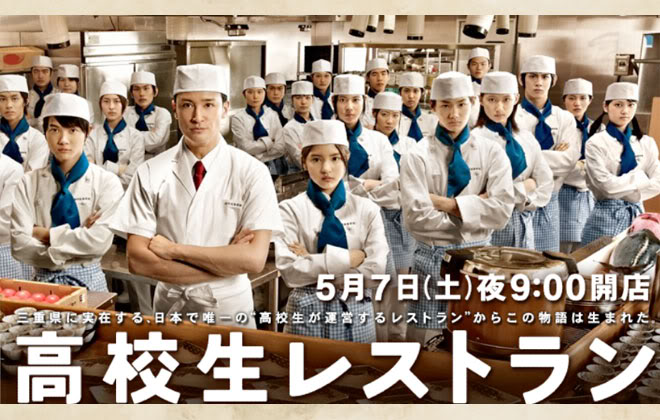 Story
Muraki Shingo of Itamae, a top Ginza restaurant, becomes a substitute teacher at Aikawa High School in his hometown of Mie Prefecture at the request of his childhood friend, Kishino Hiroshi, a town hall employee. Kishino intends to open a “High School Restaurant” to revitalise the town, and has asked Shingo to teach cooking. There are about 30 people in the culinary club. Among them are Sakamoto Yosuke, a third-year student who is respected by the club’s members and whose family runs a restaurant that sells set menus, and Yonemoto Mai, second-year student who adores him. When Shingo visits the kitchen, the members are making hamburgers and crepes as they please. However, the floor is dirty and ingredients are being used wastefully, as if it were a school festival. Seeing that, Shingo barely offers a greeting as he first points out that Yosuke’s tempura is no good. He also scolds the members harshly. “First, we’ll clean up. Those who find it a turnoff can leave, but in that case, you don’t have to come from tomorrow.” Students start to walk out in the face of Shingo’s attitude, and only 18 remain, including Yosuke and Mai. After the cleaning, Yosuke asks Shingo for the reason why his tempura is not good. Shingo’s answer is a surprise. “You’re left-handed. Get accustomed to using both the kitchen knife and cooking chopsticks with your right hand.” “I don’t know, but that teacher is genuine.” Yosuke reflects and decides to follow Shingo. They are to hold a rehearsal for the opening on one Saturday. The menu that Shingo has set is a grated yam rice bowl using Ise yam, a local specialty. Yosuke is ordered to prepare the stock according to Shingo’s instructions. Then, the day of the rehearsal comes. An incident occurs which causes a definite rift between Shingo and the members!

Characters
Matsuoka Masahiro as Muraki Shingo
A new substitute teacher of cooking at Aikawa High School. He had his sights set on being a chef of a top-rate restaurant, but does an about turn and take a job at his alma mater in order to open a “High School Student” at the request of his good friend, Kishino Hiroshi. His cooking skills are sterling, but he is inexperienced as a teacher and has intense clashes with his students.

Fukiishi Kazue as Muraki Haruka
Muraki Shingo’s younger sister. Her dream was to get a job in Tokyo, but she remained in her hometown out of consideration for her father. She always says nasty things to Shingo, but she is a dutiful daughter who contemplates marriage to a second son in order to take over the temple. She worries about the relationship between her brother and father.

Kamiki Ryunosuke as Sakamoto Yosuke
A third-year high school student, and the vice president of the culinary club. His culinary skills are the best among the club’s members. He helps out at the restaurant which his grandmother runs. He is a left-hander, but is suddenly ordered by Muraki Shingo to change to be a right-hander, and resists.

Kawashima Umika as Yonemoto Mai
A second-year high school student and member of the culinary club. She is Sakamoto Yusuke’s childhood friend and has a crush on him. Because she is considerate, she is the go-between for Muraki Shingo and the members. She constantly worries.

Harada Yoshio as Muraki Joushun
Muraki Shingo’s father. The chief priest of a Buddhist temple. Because he is a man of few words, it is difficult to understand what he is thinking. Shingo regards him as a scary old man. However, from Haruka’s perspective, father and son are alike.

Itaya Yuka as Yoshizaki Fumika
The curriculum coordinator. She is dismissive of the operation of a restaurant by high school students from an educational standpoint. She is strict even with Muraki Shingo.

Ito Hideaki as Kishino Hiroshi
A town hall employee. Muraki Shingo’s childhood friend and partner in crime. He thinks of revitalising the town by opening a “High School Restaurant”, but preparations make little headway. He is responsible for Shingo being the person in charge. However, he gets pushed around.

This blog contains information and musings on current and upcoming Japanese dramas but is not intended to be comprehensive.
View all posts by jadefrost →
This entry was posted in NTV, Spring 2011 Dramas and tagged Fukiishi Kazue, Itaya Yuka, Ito Hideaki, Kamiki Ryunosuke, Koukousei Restaurant, Matsuoka Masahiro. Bookmark the permalink.