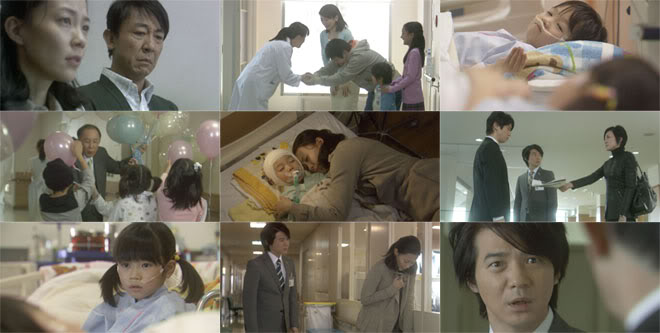 Ohno and Kuramoto are notified of the first organ donor under the age of 15 in the country at Takenouchi General Hospital. It is 6-year-old Tezuka Takeru who has been left brain dead after a fall from the veranda at his home. The coordinators join Nakamichi, the attending physician, and Takenouchi in a meeting with the family while filled with mixed feelings over this first case. Concerned about the confusion of the distraught parents, Ohno suggests that they have a good talk with each other.

Nakamichi has discovered unnatural signs of bone fractures in Takeru’s body and probes the possibility of abuse after the others have left the meeting, but this is vehemently denied by the Tezukas.

Meanwhile, Detective Enomoto, who has launched an investigation at the scene of the accident, visits Takenouchi General Hospital. Disclosing the eyewitness statements he had heard about Takeru being made to stand in the veranda, Enomoto asks Takenouchi to produce Takeru’s medical record and X-rays for the police to determine if the boy had been abused. However, he is denied on the grounds that it is not considered abuse from a medical standpoint, and feels something is amiss.

The next day, the procedure to pronounce Takeru brain dead is conducted with the consent of the family. As Yui watches on while the doctors check Takeru, she suddenly has flashbacks of her son repeatedly hitting against the glass doors of the veranda from the outside. The sounds of his frantic calls of “mother” and his palms striking the glass doors overwhelm her, and she rushes out of the room. A worried Ohno chases after her.

Yui desperately clings on to hope that new drugs may enable Takeru to wake up one day, but there has not been a case in which a person declared legally brain dead has recovered. And so, she makes the request to donate her son’s heart to a boy of a similar age. However, that is not allowed in order to ensure fairness in medical transplants.

At Zisei Hospital, Takenouchi General Hospital’s affiliate hospital, the Tachibanas are informed that Kaito has to continue with a diuretic and vasopressor until the water in his lungs are cleared. Then, they learn through the news that a 6-year-old boy is comatose after a five-floor fall. Miki turns hopeful, but her husband exasperatedly urges her to stop waiting for misfortune to befall another child.

Kanako of Shukan Headline, who has been investigating the link between politicians, pharmaceutical companies and hospitals which promote organ transplants, watches the same news on television. Taking an interest in Takenouchi General Hospital and the emergence of Japan’s first organ donor under the age of 15, she visits the ICU at Zisei Hospital’s pediatric ward where she sees Kaito and his new friend, 6-year-old Okui Rika, who also has an enlarged heart.

The visit seems to trigger Kanoko’s memory. That night, she searches through magazines until she finally comes across an article with a picture of Saito Toshifumi, the chairman of Saito Pharmaceuticals, and Rika!

On the other hand, the organ transplant support centre proceeds with the selection of the recipients of Takeru’s organs. A 6-year-old boy at Zisei Hospital is to receive his heart. Kaito’s attending physician conveys the good news to the Tachibanas. At that moment, Kanoko, who has rushed to the hospital’s pediatric ward, overhears the conversation and hurriedly tips off her editor.

However, the Tachibanas joy is shortlived. At the press conference convened by the Ministry of Health, Labour and Welfare, the director of the organ transplant support centre announces that the recipient of Takeru’s heart is a 6-year-old girl at Zisei Hospital and not a boy?! Miki and her husband are told that Kaito cannot undergo organ transplant because he was found to have an infection during pre-surgery tests.

Kanoko is taken aback. There is a flurry of around her as medical staff hurry toward a room. She trails them, and finds herself standing in front of the Surgery Preparation Room. Then, through the open door, she catches a brief glimpse of Rika lying in a bed … …

Another press conference is to be held at Takenouchi General Hospital. Kanoko runs into Ohno and Kuramoto when she reaches the hospital. As both men walk away, she angrily calls out to them, “Was the organ recipient supposed to be a girl right from the start?” The question stops them in their tracks. Kanoko thrusts the magazine article into Kuramoto’s hands as she tells them that the girl who will get the heart is Okui Rika, the granddaughter of Saito Toshifumi!

Saito is not only a prominent business figure but also one of Zisei Hospital’s big donors. He has close ties with the health ministry officials. It is too much of a coincidence that his granddaughter is now being given the heart of the country’s first organ donor under the age of 15. “Can organs be bought with money!?” Kanoko demands.

A stunned Ohno rushes to the hospital director’s office and comes upon Takenouchi and Saito who are headed to the press conference venue. Saito concedes that he had altered the order on the transplant list. It had taken him six years and millions of yen to get the bill enacted. He would even dispossess a child who should have been saved, for the sake of his own granddaughter. In anger, Ohno declares that he will tell all. But Saito smugly points out that he has no evidence.

In the midst of this, the condition of Kaito starts to deteriorate … …